By far the worst condition CCU arrived a few weeks ago. The PCB was probably kept in a damages state for quite some time and the the acid turned the PCB silk screen into a dark black color. 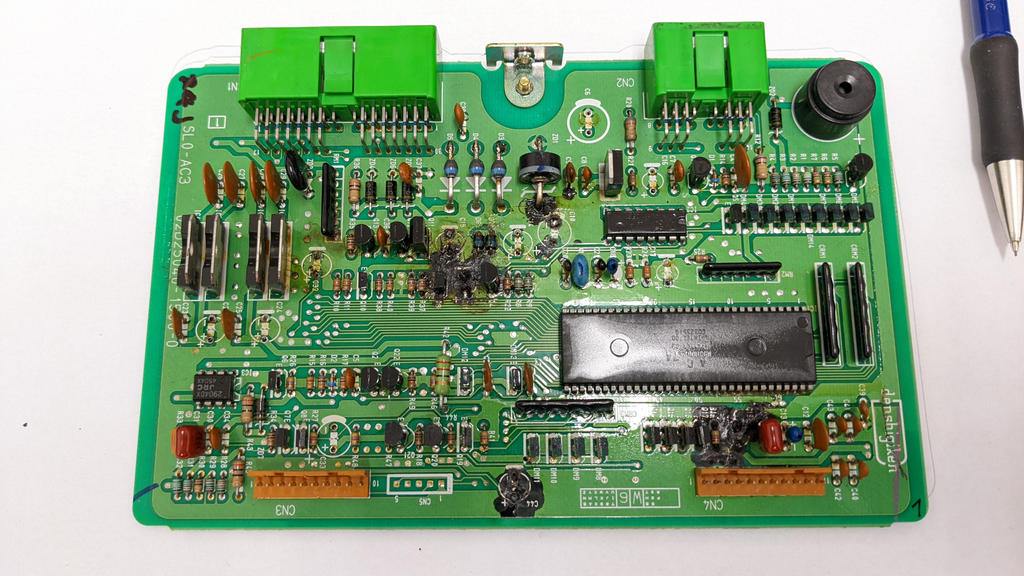 Here are some more details of the affected areas: 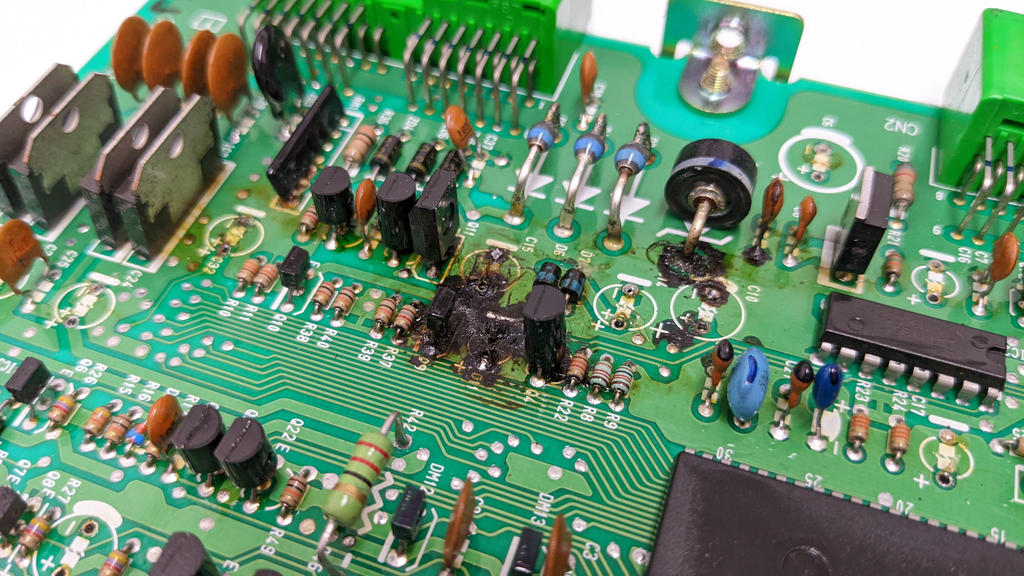 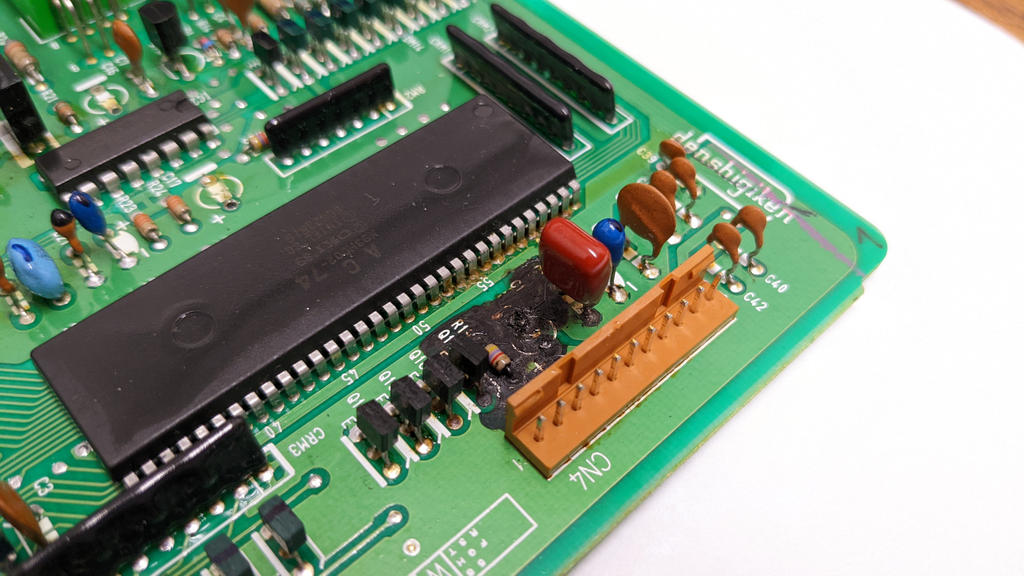 ​
Besides the capacitors, several additional components had to be removed, only to be able to clean the PCB:

Using a glass fibre pen, all traces of the acid were removed and bare copper areas were covered in solder. Surprisingly, only three track repairs were required. 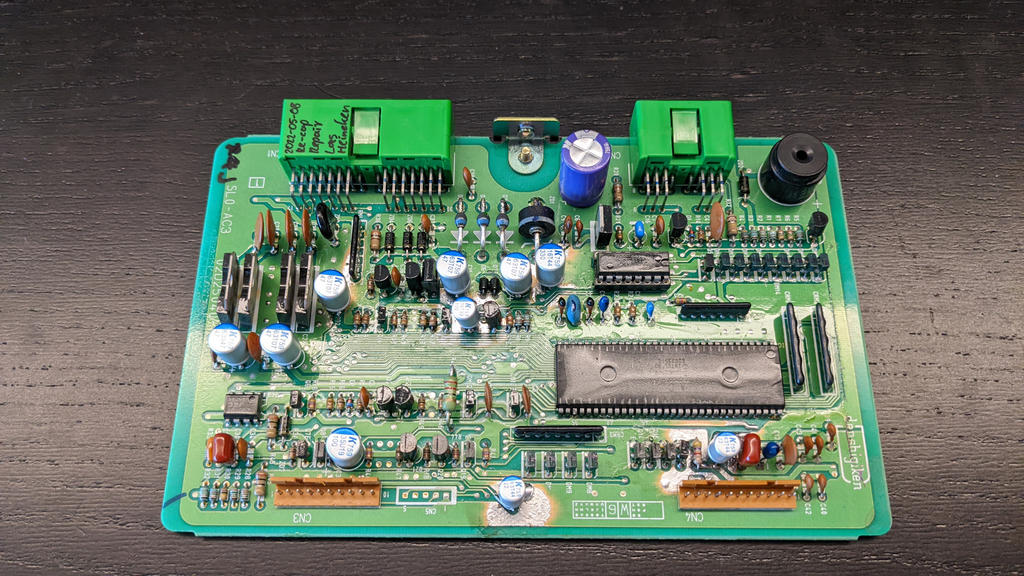 A first test run showed a working display and buttons but the AC fans did not come on and the fan speed dial wasn't working (the fan stayed in auto mode regardless of the dial).
Using a known good PCB, suspicious parts where de-soldered, checked and compared. It turned out that R19 needed replacement since it was near mechanical failure due to its legs almost eaten away. After a defective Q9 was replaced, the AC fan started working. Q17 turned out to be defect as well and once replace, the fan speed dial was working again.

Sounds like a piece of cake but it's the result of eight hours of measuring, comparing and testing. Not such a smart idea to go to bed when the first birds can be heard .. but finally successful

The backside of the PCB was full covered in conformal coating, the top side was manually touched-up by means of a brush.

New knowledge on broken components and their effect was added to a corresponding blog entry on NSXCB, for future reference: http://www.nsxcb.co.uk/entry.php?2751-Climate-Control-Unit-(CCU)-Repair
Last edited: May 15, 2022
1997 JDM Custom Order AT VIN 1400005 - Stock
Heineken's Garage on NSXCB

Thanks for d your knowledge, skill and willingness to document and share!

Q9 and Q10 (responsible for AC compressor and AC fans) are NEC AN1L3N - a PNP type transistor in with two integrated resistors: 4.7 kΩ (R1) at the base and 10 kΩ (R2) from base to emitter. Through-hole mounted replacements are not available any more. A compatible SMD replacement is PDTA143X. To use them, matching adapter PCBs (SOT23 to DIP) are required: 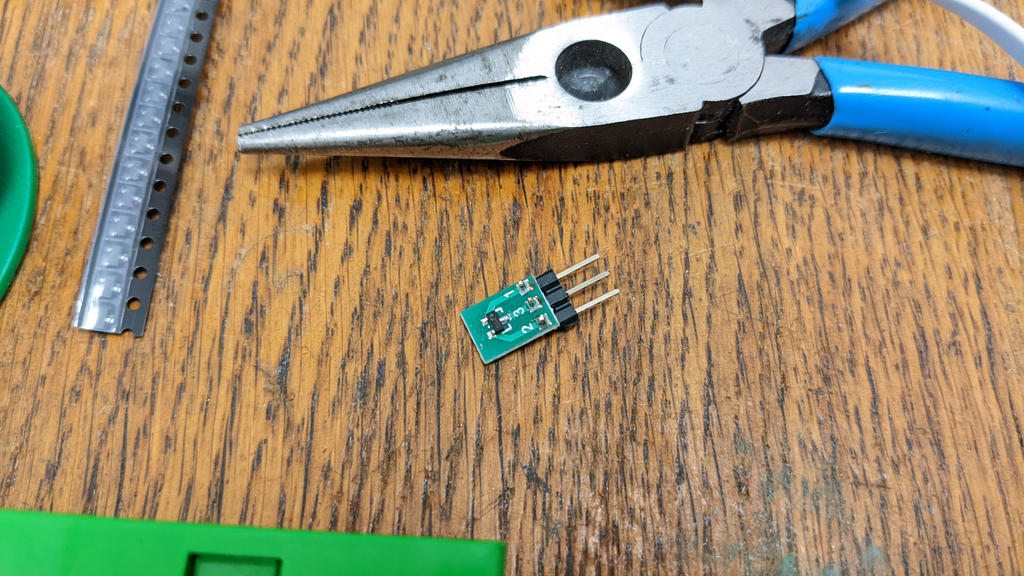 ​
View attachment 14615
Besides observing the correct pin-out, the place of installation may require the pin headers to be installed from the left or the right side. Additionally, their ends may need to be cut after soldering to make sure they stay clear of any conducting material (like a capacitor metal housing). 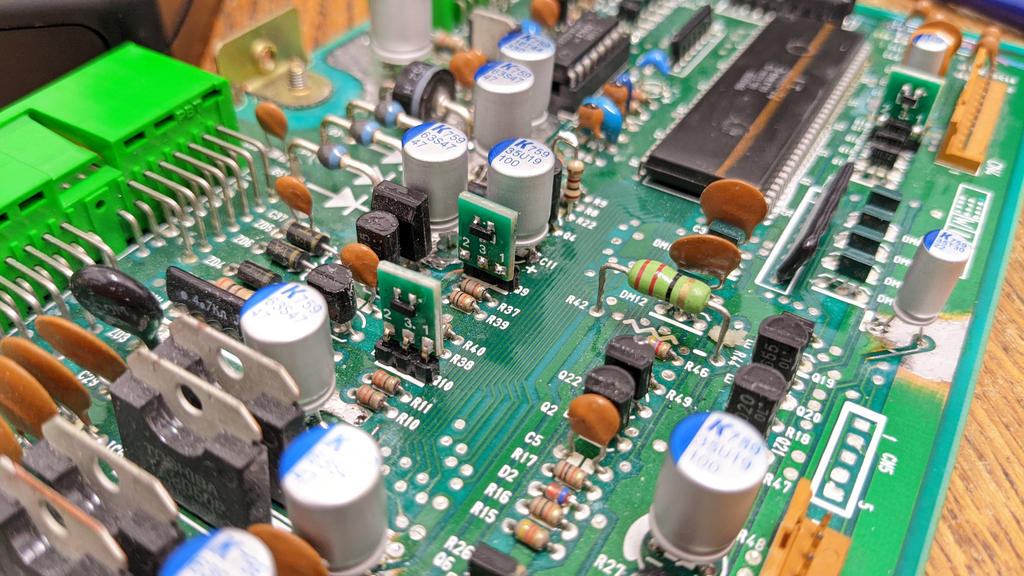 ​
The transistors Q14 to Q17 are level shifters providing the position of the fan speed dial to the microcontroller. These are NPN transistors with a single internal 4.7 kΩ base resistor (NEC A1L3Z).
Same as with Q9 and Q10, they are no longer available as a direct replacement but still sold in SOT 323 SMD packaging: ADTC143TUAQ - another job for the adapter PCBs: 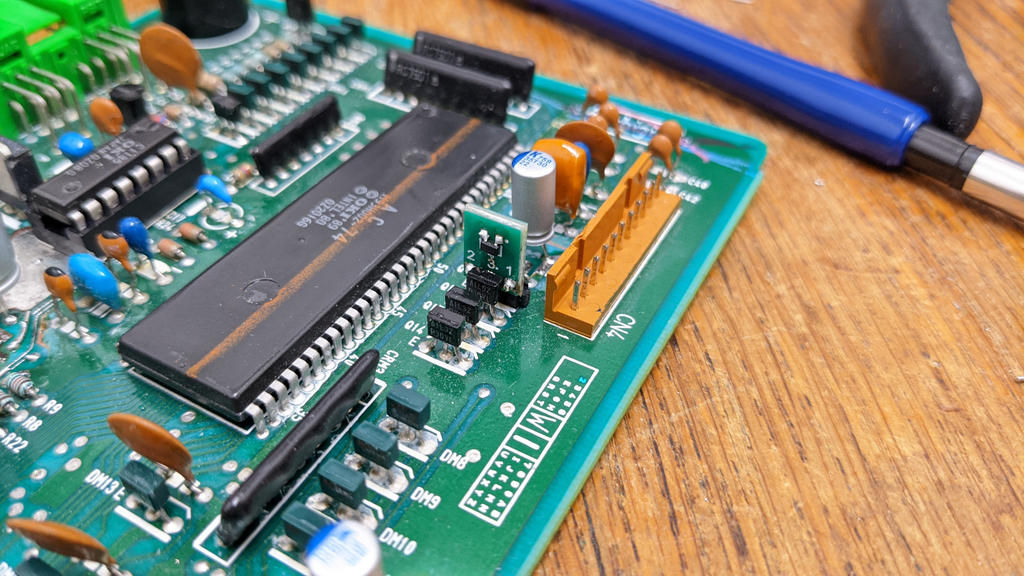 ​
Both replacements are confirmed to work fine, even though it's a little fiddly to work with the small SMD parts.
The corresponding blog entry has been extended with the information in this message: http://www.nsxcb.co.uk/entry.php?2751-Climate-Control-Unit-(CCU)-Repair
1997 JDM Custom Order AT VIN 1400005 - Stock
Heineken's Garage on NSXCB