Oh, my DLC-coated wrist pins are still going after nine years at 550 WHP and 9k RPMs in the OEM rods.

At the time, I had considered other items for DLC coating like you (cams, rocker pads), but decided not to as no one else back then had done much in street applications with these coatings.

Thanks for the helpful insights @Mac Attack! Nice to know there's a little more flexibility with material removal on the big ends than I thought.

I went back and forth with what I want to do with the wrist pins quite a bit but ultimately decided to stick to the original engineering and interference fit them, after all Honda used this approach up past 8500rpm in some of the Type R 4 cylinder engines, but with the DLC coating after talking to Calico about it. It also keeps me from having to guess at oil clearances and will make the engine a little more resistant to damage from pinging if I end up with a batch of bad gas with the high C/R I'm running, as that tends to beat the hell out of the small ends if they are floating since its such a small load bearing surface compared to the wrist pin bores in the pistons and rod bearings.
Last edited: Nov 16, 2022

Yeah, you should be fine looking at your pics.

Interesting idea about the interference fit. I overlooked that possibility when doing mine although I did consider going to a larger diameter wrist pin for the reason you noted. Wiseco made two diameters you could have their pistons spec'd for but ultimately I just kept their standard diameter.

I understand what you're going through! You're doing great!

Was that the 23mm option for the C32 rods? I always found it odd that Honda went with a larger wrist pin for only a marginal change in piston weight and power output but they must have had some reason to justify it.

I remember seeing @BATMANs press fit his pistons in his build thread so that started me down that path. The main worry here is doing it without overheating the rods. Calico said that with the DLC pins the rods don't even have to be heated up as long as the pin bores are perfectly smooth, which they are thanks to the 1000 grit flex honing, they can just be pressed right in so I might try to make some sort of a fixture to do that without damaging the piston, then just heat the rod to 250 degrees or so in the oven to loosen it up a bit and press it in.

I got my block back from NB Finishing in Illinois with the main saddles built up with electroplating so now I'm shopping around for a shop to do the final line bore, deck surface, and cylinder honing. Mountune in CA seemed like a solid choice at first but they don't bother to answer the phone so I don't think I want to deal with that, so I might take it to a localish place that I've had recommended to me a few times and save the trouble and risk of shipping the block cross country again. So far, I haven't found any correlation between fame and quality of machine work so might as well go small and local to keep an eye on things.

The electroplating process involved some fairly caustic chemicals so this isn't something I'd want to do on a block that's already had final machining done. Lots of nasty corrosion to remove as well as some surface rust spots in the cylinder bores. This was not an engine shop though so I can't really blame them, its a shop that does repairs on specialized printing press components that did this job for me as an experiment. The nice thing about this is I can have the block vapor blasted without worrying too much since it still needs to go for final machining. 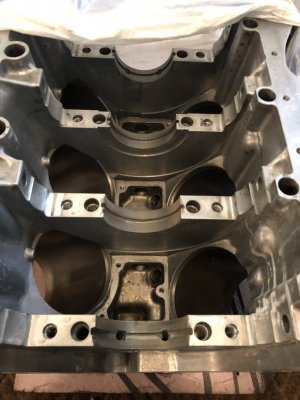 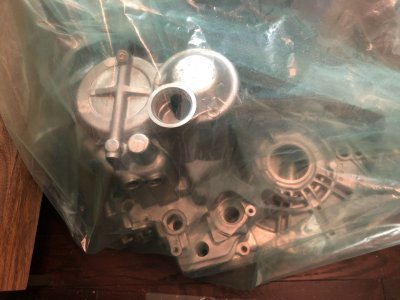 The electroplating is very interesting. Cleaning will be a pain but can be done. Besides having it hot tanked again at the local machine shop after they're done with the final machining, I recommend running a bunch of long nylon wire brushes with WD40 through all the oil galleys, and then I used my steam cleaner to blast everything with Dawn, followed by a bunch more WD40 and my air compressor running a long time to force everything out....

The standard Wiseco wrist pin for their NSX pistons is 22mm outer diameter with a 4.1mm thickness. As mentioned earlier, I debated whether or not to upgrade to their 22mm OD pin with a 5.7mm thickness. There is also a material upgrade between them. As I'd already been through multiple iterations with my build at this point due to others mistakes and then my own lack of knowledge/planning, I just decided to stick with what I had and get the standard pins DLC coated. I called Wiseco tech hotline to make sure what I had would work with my desired goals and they said it should (but near the limit). As I was near that limit on other things (like the OEM rods and main caps), I just decided to get 'er done and not mess with new pins and then rebalancing everything.

Honda probably went with 23mm diameter pins for the C32 rods and then reduced the wall thickness to keep the weight less than or equal to the smaller pin but marginally stronger. Their engineers seem to be nutty like that.