Dug the rear hatch glass out from under the cobwebs in the basement and spent a good 30 minutes cleaning it up. I used 303 on all of the rubber and plastic and glass cleaner on the glass. For the inside, there was blowby oil from the struts. I used a microfiber with class cleaner to avoid damaging the rear defroster wires in the glass. For the outer glass, I used fine steel wool and glass cleaner, followed by microfiber. It is like a mirror now. 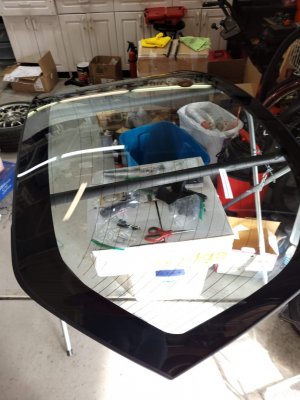 I was able to prep the car and the hatch for installation. First is to place the new gas struts on the car so they can be easily lifted into place while holding the hatch. Honda kindly packages them separately from the ball stud, so it's really just a push-click job. 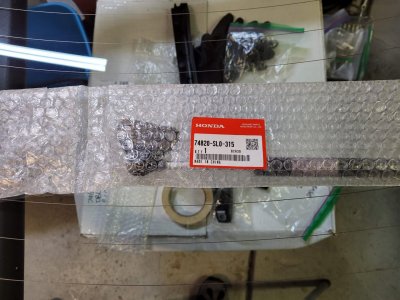 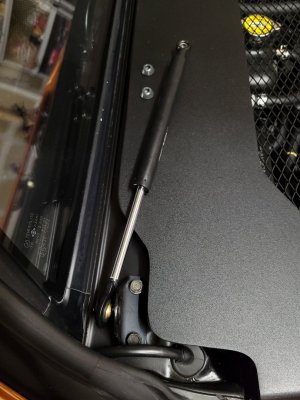 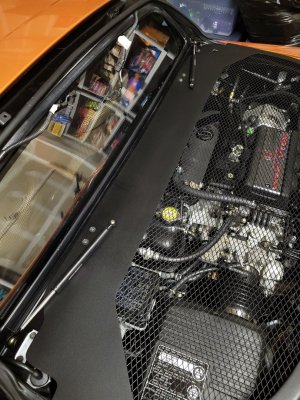 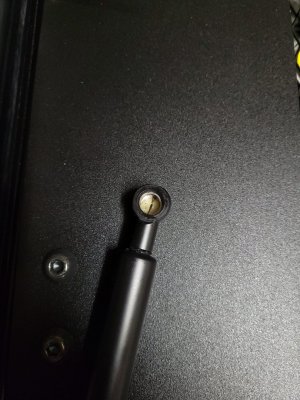 Next, while doing a final clean on the glass, I noticed this broken off screw on the hatch. It reminded me that I had to drill out the screw on removal since it was totally stuck. After almost 5 years I had forgotten! I now remember what a miserable job it was to reach/bend across the engine bay to get the drill on this thing. But, with this easy access, a pair of vise-grips was all I needed to remove it. The new screws will be going in with anti-seize! 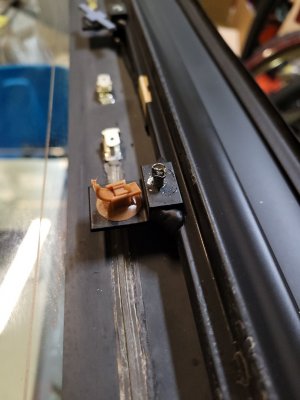 Your comment about finding that broken screw 5 years later really resonated with me. When working on a project of this size, how do you keep things straight? You must have a to-do list a mile long, but how do you remember to do everything at the appropriate time, so that you don't have to redo things?
1991 Berlina Black NSX - current
1992 Berlina Black NSX - sold

“When you look at the NSX today, it’s almost quaint, but that’s because you’re looking through the lens of every supercar and sportscar that it made possible”

The rear glass is back on the car. It was a 3-person job and my neighbor kindly stopped by to help. Basically, two people hold the glass and a third one (Mrs. Honcho) threads the 6 mm bolts. 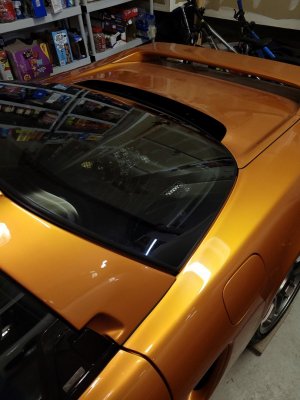 My neighbor also brought his very expensive digital torque wrench, which I used to torque the axle nuts. My own 1/2" wrench only goes to 150 lb/ft and you need 234 lb/ft for the nuts.

Also, the package arrived from Japan so I can place the front wheel liners and front lip. Once that is complete, I will set the ride heights and test drive.
1991 NSX | WILL'S CAR
1992 NSX | IMOLA TYPE-S ZERO...EVENTUALLY
NSXCA | Honcho's Place Instagram

ekhonda87 said:
Your comment about finding that broken screw 5 years later really resonated with me. When working on a project of this size, how do you keep things straight? You must have a to-do list a mile long, but how do you remember to do everything at the appropriate time, so that you don't have to redo things?
Click to expand...

Because my project was "evolving," this was much harder than it had to be. Many of the early removed parts (mostly from the front of the car) were in unlabeled bags because, in 2018, I thought I was just going to repair the steering rack and drive as-is. Once Mrs. Honcho gave the green light for a full restoration in late 2019, I was more organized.

I used the following methods: 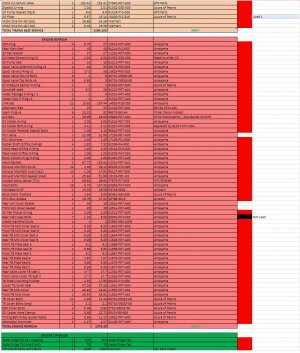 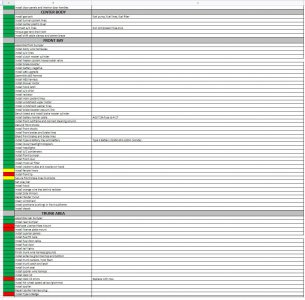 In retrospect, this system worked quite well and I only encountered problems when I failed to follow it. Several times over the years, I would throw a bag with bolts into the bin that contained the original piece. My thinking was that it would be easier to find the bag when the time came to put the part back on the car. But, in reality all it did was create a chaos of bagged bolts all over the house. For example, right now I can't find the sandwich bag with the engine cowl screws. It didn't grow legs and walk away, but as of now it's lost in the garage or basement somewhere. Instead, it should have gone in the "engine" clear plastic bin.

If I ever did this project again, I would use this system again.
1991 NSX | WILL'S CAR
1992 NSX | IMOLA TYPE-S ZERO...EVENTUALLY
NSXCA | Honcho's Place Instagram

The answer is always Excel.

303 over the Honda spec'd Shin-Etsu? Have you tried both?

303 over the Honda spec'd Shin-Etsu? Have you tried both?
Click to expand...

The Shin-Etsu is fantastic and I use it everywhere. But, it is a silicone-based grease so it does leave a light film. The 303 dries matte and I just prefer that look. The 303 also has UV blockers, which is a real concern on this car. I do hit all the rubber seals with the Shin-Etsu once per year though, since it does penetrate the rubber and preserves elasticity in a way the 303 can't.
1991 NSX | WILL'S CAR
1992 NSX | IMOLA TYPE-S ZERO...EVENTUALLY
NSXCA | Honcho's Place Instagram

Got the axle nuts staked and the S-Zero center caps installed. 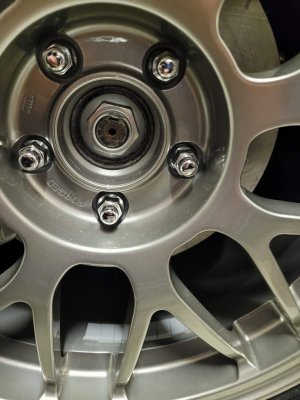 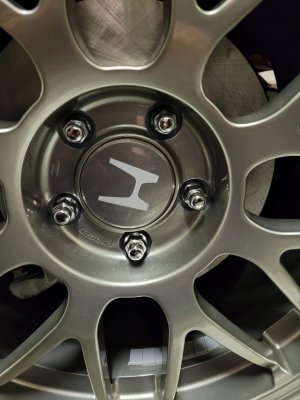 We had a successful test drive today! The car runs beautifully, even with the dodgy Prospeed tune. No weird noises, clunks, smoke or leaking fluid. The clutch engages very smoothly and the transmission is silent, even at the 25F temperatures we were driving in- the Torco trans fluid is quite good and I did my job right. The seats are remarkably comfortable, once you get in them. We had the heater cranked to 90 mostly for the air bleeding, but it also made the car toasty warm.

I can say that the Continental ECS tires do continue to have acceptable grip at 25F, though I would not do any sort of hard cornering on them. They do not, as the internet forums argue, turn into hard plastic hockey pucks or crack at this temperature. Still, I don't know if I would trust them much lower. I may grab a set of General AS-05 to use during the Dec-Mar period, where is can get really cold here in Colorado (it is 9F today). 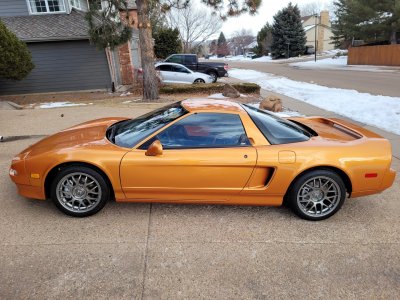 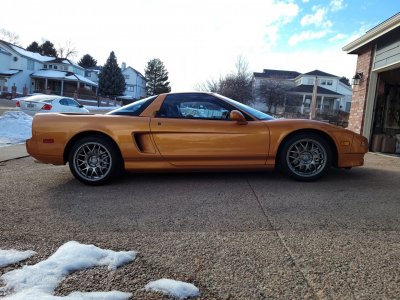 Then the sun came out. I had to get a picture of the sun on the pearl paint for the first time. 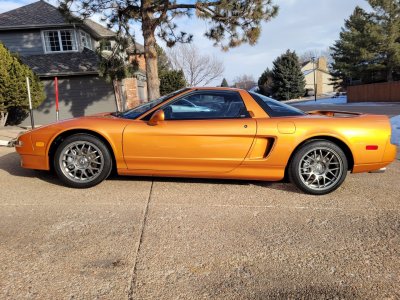 It was more of a challenge to get here than I expected. Bottom line: the MCS suspension doesn't fit and does not put the car at a street-safe or even technically useable height. I'll post more on that in the MCS thread, but suffice it to say we tried every possible adjustment and spring/shock combo and it just wouldn't work. So, what you are seeing in these pictures is the NSX-R suspension. I ripped open the carefully packed box and slapped it on. It rides beautifully and feels new, even though these are 15-year old dampers.
The drive itself was just around my neighborhood at 15-30 mph, 1st and 2nd gear only and no more than 3,000 rpm. It's hilly where I live, so there were some nice inclines and declines to help the air purging from the coolant hoses. Some feedback:
The high is something like 1F for the next 3-4 days, so no more driving for now. The car has to go back in the air to finish the front end and front lip. And, also to bleed the brakes again. Then, I have to install the side sill trim (new) and the Type-S badge. The next real driving day is Thursday, where it will be sunny and 45F, apparently. I hope to sort the brakes before then so I can finally take the car to smog and get my permanent license plates. Hopefully the air inspection shop won't reject me due to the cockeyed steering wheel!

Finally, I would like to say a huge THANK YOU to @Big McLargeHuge, who generously spent the entire morning and most of the afternoon helping me get here. It was his idea to use the NSX-R suspension when I way ready to completely throw in the towel on the idea of driving after it became clear the MCS would not work. His positive energy and considerable wrenching skillz were instrumental in making this happen. It's only fitting that he got to ride along for the test drive. I think he was grinning wider than me.
1991 NSX | WILL'S CAR
1992 NSX | IMOLA TYPE-S ZERO...EVENTUALLY
NSXCA | Honcho's Place Instagram

Fabricated the license plate mount. I used spare 5mm rivnuts from the front fender fix. 5mm machine screws and 1" plastic spacers make it work. I may revise the design down the road to something less clunky. 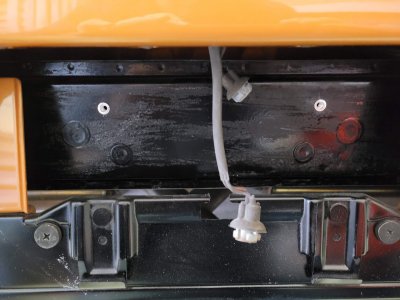 After the MCS debacle, installed the NSX-R suspension. OEM bolted right in no fuss. 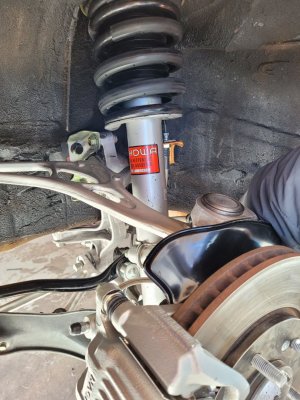 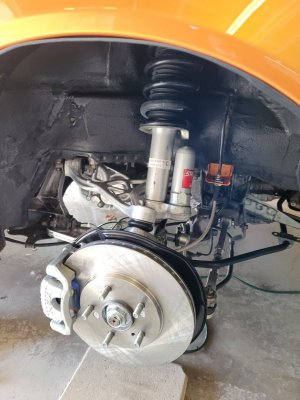 Post-drive coolant check. It looks like all of the air has been purged. The level did not change. I will still check the rad and heater bleeders. 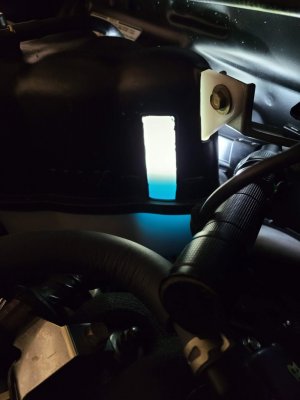 Honcho car looks stunning out in the wild! Imola is such a nice color for the NSX! Amazing work!
Congratulations! 👏👏👏
My Build: http://www.nsxprime.com/forum/showthread.php/170650-BBVNSX-93-EDM-NSX-From-Portugal!