RC-DEVIL said:
Flowrate is measured at how much fuel an injector flows at an industry standard 43.5 psi, because the OEM injectors are older needle style injectors they do not atomize as well as a modern 4,12, or 18 hole injectors so they shoot "two streams" which is a dated technology. The game nowadays is how fine/dense of a mist and small the particles of fuel can get. The fuel rail/fuel pressure regulator controls this ~43.5psi condition for the injectors so flowrate can be varied to a certain extent when increasing how finely the fuel is atomized. My understanding is that as we increase the atomization efficiency and mist density of fuel in the motor we can safely run a slightly larger flowrated injector. The ECU cannot physically see the larger flowrate but because the difference is not much it compensates in the fuel table. I am running a Uni-Filter, DF scoop, and full SOS exhaust setup, so i believe these modifications make the case for larger injectors even more convincing.
Click to expand...

I don't know that disc style (multi hole) injectors necessarily generate a finer spray pattern than pintle injectors. I have another car equipped with ancient (45+ year old) Bosch ... 036 injectors. I replaced the cleaned 036 pintle injectors with some 4 hole disc injectors and as part of that did a flow characterization table on both the Bosch and the replacement injectors. Visually, differences in the spray patterns were indiscernible. Performance differences between the injectors were also indiscernible. My primary motivation for the switch was that at the time replacement Boschs were knocking in excess of $200 - $250 each and getting hard to find. The disc injectors were something like $40 a pop and easily available.

Multi hole disc injectors do allow for bifurcated spray patterns. This might have some emissions performance advantage under some operating conditions in an OEM application designed to make us of it. It may or may not have some advantage on the NSX providing that the bifurcated spray patterns are even pointed in the right directions. These injectors were not designed for NSX intake manifolds / ports. Has anybody actually looked at the spray pattern from these injectors and figured out where they are going in the manifold - i.e we are not just washing the outside port walls?. The fact that the stock injector location was selected with a pintle style injector in mind could mean that an injector with a different spray pattern may be sub optimal. Also, remember that on the C30 / C32 engine the intake valves have staggered opening in non Vtec mode to induce turbulence in the cylinder so balanced fuel flow into each port below Vtec may or may not be what you want.

Disc injectors generally have a lighter weight operating mechanism than pintle injectors. This has the advantage that the time delay from turning the injector on to getting fuel to flow (and turn off /fuel cut-off) is shorter than on a pintle injector. Some references expand this to better linearity at low pulse widths allowing a higher turn down on the injector. My limited testing on a comparable pintle versus disc injector indicated that linearity on both went in the toilet somewhere between 0.75 msec and 1.0 msec so not a significant difference since my shortest expected pulse widths were in the order of 1.25 msec. I have also seen contradicting claims that disc injectors may be more resistant to deposit formation. This could be a big motivation for the OEMs since they need to insure that their engines remain compliant during the 5yr/50,000 mi (or is it 8 yr/80,000 mi) emission warranty period. I am also a little suspicious that OEMs like the disc injectors because they seem to cost less to make.

Trying stuff like this is always interesting. As long as the flow rates on the replacement injectors are close (slightly higher always being safe) and the injector offsets are very close (if you like an engine with a smooth idle) the switch should go relatively smoothly. If you have a lightly modified engine then you may be getting a performance improvement because of the touch higher flow rates. As to performance advantages from the pintle to disc switch, in the absence of a strict before / after testing regimen with quantitative measurements I am less sold. The problem of Confirmation Bias makes the butt dyno assessment unreliable.
Last edited: Feb 7, 2019
"Your sole purpose in life might be to serve as a warning to others" - read that on the bottom of a beer bottle cap that I had just opened

Has there been any update here?

I am curious if shops like RC Engineering or other shops doing injector work would be willing to chime in.
1995 Brooklands Green

RC-DEVIL said:
nope just tried the Osidetiger stuff so far, got any specs on the TL units?
Click to expand...

Hi RC-DEVIL! any udates on your last injectors setup? Is the setup performing well?

thanks
Bruno
My Build: http://www.nsxprime.com/forum/showthread.php/170650-BBVNSX-93-EDM-NSX-From-Portugal!

sorry to update this after so long. I got quite obsessed over injector efficiency and have been testing a new setup which i will release and be available for other owners. The second set performed great and i now have another NSX owner testing a set in florida.

Somewhat surprised that NSX owners are ok with putting random injectors on their car without at least taking it to a tuner to check the AFRs. If you're going up in size you probably won't go lean, but I can almost promise you that it's running rich at different RPMs.

I hope that the guy on the NSX owners FB group hurries up and finishes cracking the OE ECU. If we can start to modify the ignition/fuel tables without having to get an aftermarket ECU this stuff gets much, much more cost effective.
1992 5spd
Download your service manual by clicking here.

I don't really see the point in changing injector sizes without tuning, it's risk for virtually no benefit over what you'd get by just having the factory injectors professionally cleaned and rebuilt. Fuel trims can compensate for changes in part throttle maps to some extent but once you go into open loop mode at high load the trims are disabled and you are 100% at the mercy of the factory maps.

NA1 injectors flow 280cc/min, based on the flow sheet I got back when I had mine refreshed. Perhaps NA2 are 300?

If anyone wants to send me some 330cc injectors (I will return them) for testing I can provide AFR charts, as I have my chipped ECU set up with a wideband and logging patches.

I should of sent those 330 injectors to ya to test them out since you got the wideband and datalogging, but sent them back to osidetiger because the 330 he sent me was running too rich. My buddy @ speedfactory was nice enough to put my nsx on dyno pull. I ended up making 244hp 193tq with these 330cc mustard color injectors. Osidetiger will exchange these out for 270cc.

I would not run smaller injectors without being able to see the AFR in real time. The NSX does not apply fuel trims in open loop, and open loop AFRs are borderline dangerous on a stock tune with stock 280cc injectors with bolt ons as it is.

Unless you are going to tune the fuel parameters and dead times, I would strongly recommend sticking with the stock 280s.
Last edited: Sep 23, 2020

For those who haven't seen it, this is the stock tune on my 94 NSX with headers and exhaust, with the stock 280cc injectors all cleaned and flowing perfectly.

In this chart, yellow is AFR, blue is load/manifold pressure, red is tps, pink is rpm, green indicates the car is in open loop, and the salmon color is injector duty cycle. 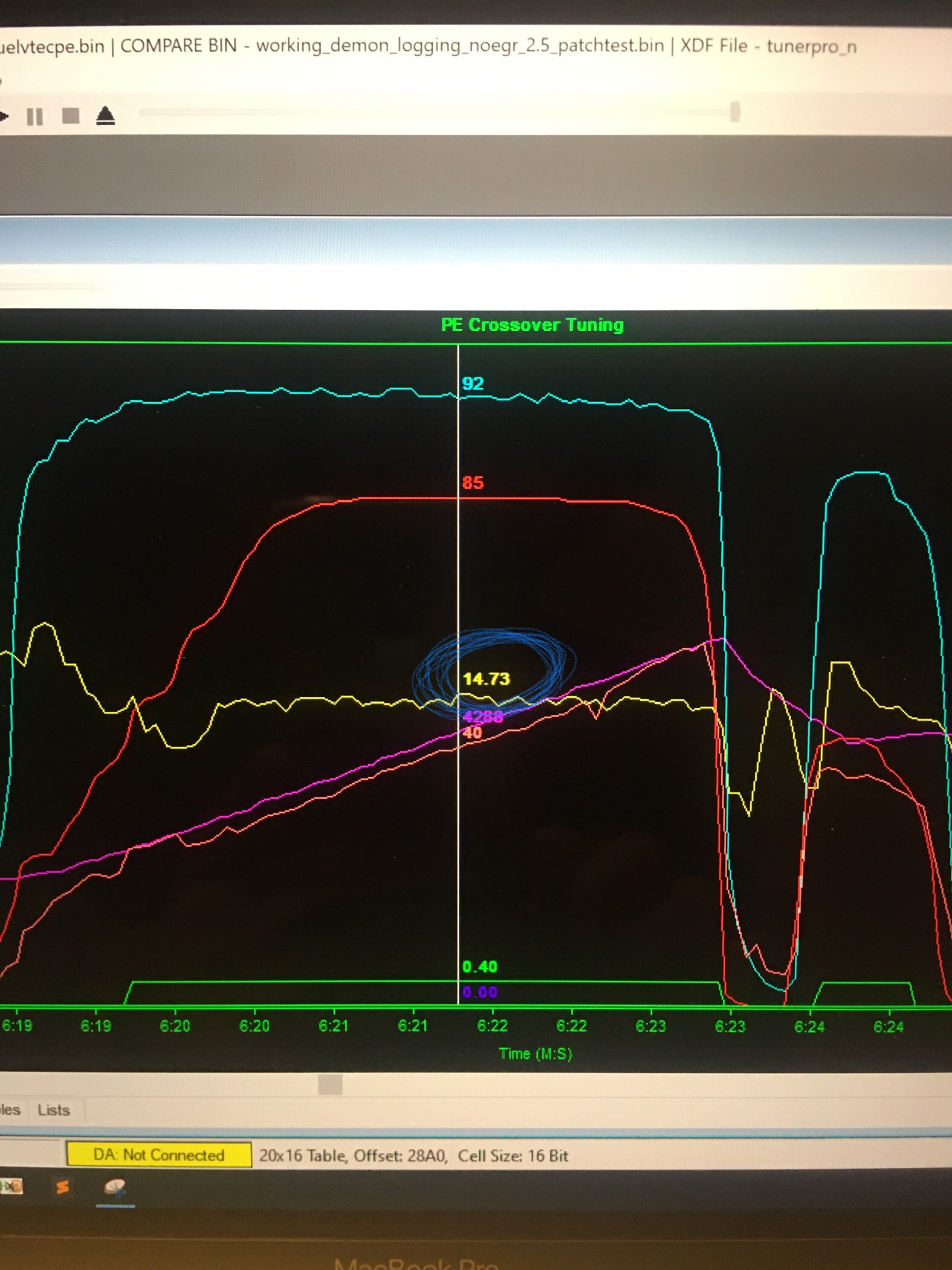 Any further updates on this topic?

Any luck on this? Looking to do rdx injectors but not finding anyone that still offers the ecu prostreet tune or harnesses.

littledevilcrx said:
Any luck on this? Looking to do rdx injectors but not finding anyone that still offers the ecu prostreet tune or harnesses.
Click to expand...

Prospeed is pretty much out of the NSX aftermarket world at this point. To use any other injector, you're going to need a standalone like the Haltech or modify your OEM ECU with the Demon II so that you can adjust the fuel tables to account for the different flow and dead times. If you try to use bigger injectors without changing the ECU fuel tables, the car will run on closed loop, but your open loop fueling will be wrong and could be dangerous for your engine.

You can buy the RDX injectors, top hats and wire adapters from many places on the web- they are not unique to the NSX. Just get the OBD-I version wires. Be careful of fake injectors- they are all over. Buy them either from a reputable shop or directly from Honda.
1991 NSX | WILL'S CAR
1992 NSX | IMOLA TYPE-S ZERO...EVENTUALLY
NSXCA | Honcho's Place Instagram

Today at 12:38 AM
bogle
Troubleshooting a misfiring cylinder

Alternatives for OBD2 piggyback? (potential issue with my F/IC)