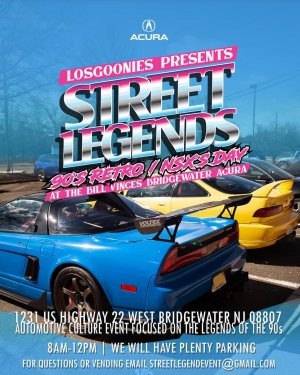 I got notified by my non-NSX friend but haven't seen this posted anywhere in prime or on fb? Is anyone aware of this?

I plan to be there for the first hour from 8-9AM. As the weather gets colder, this may be the last event my NSX can withstand.

Only if he "abides" lol.
"If the bushes were trees, the trees would be falling." -REM

DocL said:
Only if he "abides" lol.
Click to expand...

"He" abides and yes, I totally forgot to post this sooner! Action packed weekend for me but I'll be there. I'll be at Radwood Greenwich Saturday and here on Sunday. Like many of you have mentioned, this will be probably my last event as well till next season. Doing some work to my NSX and sadly, the winter is coming.
99 Zanardi #24/50 Red/Black 32k
22 NSX Type S #24/350 LBBP
00 Honda S2000 APV3 clone Red/Black 42k
93 Honda Del Sol Si Samba Green 87k

Haha so now I know why it wasn't more advertised. This crowd was definitely younger and more rowdy then the typical NSX crowd. Maybe that explains why there were only a handful of NSX owners there. I met Alex, Sergio, and Marby there. Kun also showed up with a customer's car but right when I was pulling out. I guess "The Kid" was the later NSX that showed up and took my spot?

I met an S2000 owner (only one in the show) and he was pissed they didn't let him onto the main lot since he wasn't a 90's legend.

The cars were all very interesting though. I saw a lot of cool modded cars and not your usual boring mix of stock cars. I just wish I had friends who could wake up that early lol.

My daughter was dragging her feet. It was actually a pretty good turnout which some nice cars. Big difference than the Radwood event which I attended the day before.