hey prime! new owner here...
stumbled onto this car purely by chance, this fall i was shopping for a NSX for my father, and a guy on one of the facebook groups im on messaged me and said his boss had a neglected 91 that hadnt run in about 3 years that he was thinking about selling. i told the guy to tell his boss i wanted to look at it and possibly make a deal on it. after he spoke with him, his boss decided he was on the fence about selling the car. i then proceeded to find a nice 91 auto in st louis that was in my fathers price range, and went ahead and made the deal to buy that car. the morning i was on my way to boston airport from maine to go get the st louis car, the guy calls me to say his boss is ready to talk about selling the original car.... perfect timing right?
after i returned from my roadtrip home from st louis with my dads nsx, i went ahead and looked at the other car for the heck of it. it was rough, paint was junk, drivers seat was junk, carpets were stained, and it didnt run. owner said he wanted 20k out of the car. this was more then i was willing to spend on a car i really didnt need, since my dad already had his car. after a few months the owner got back in touch with me, claimed he had gotten the car running, and was willing to move on his price. after some haggling and negotiating, he came down to 15k. again, this was quite a chunk of change for a car i didnt need. however, id been following the insurance auctions for quite some time and had yet to see a nsx go for less then 10k, even when they were completely annihilated from a wreck. so after emptying my piggy bank i went back with a trailer. figured i couldnt lose on the deal, and wouldnt have any issue getting my money back if i decided to sell the car later on.
so the car: 1991 berlina black, clean title, two owners, 115k on it. zero accidents ever, not so much as a door ding anywhere on the car. runs and drives great, transmission not in snap ring range (last 6 of serial are 000008).
on to pics! 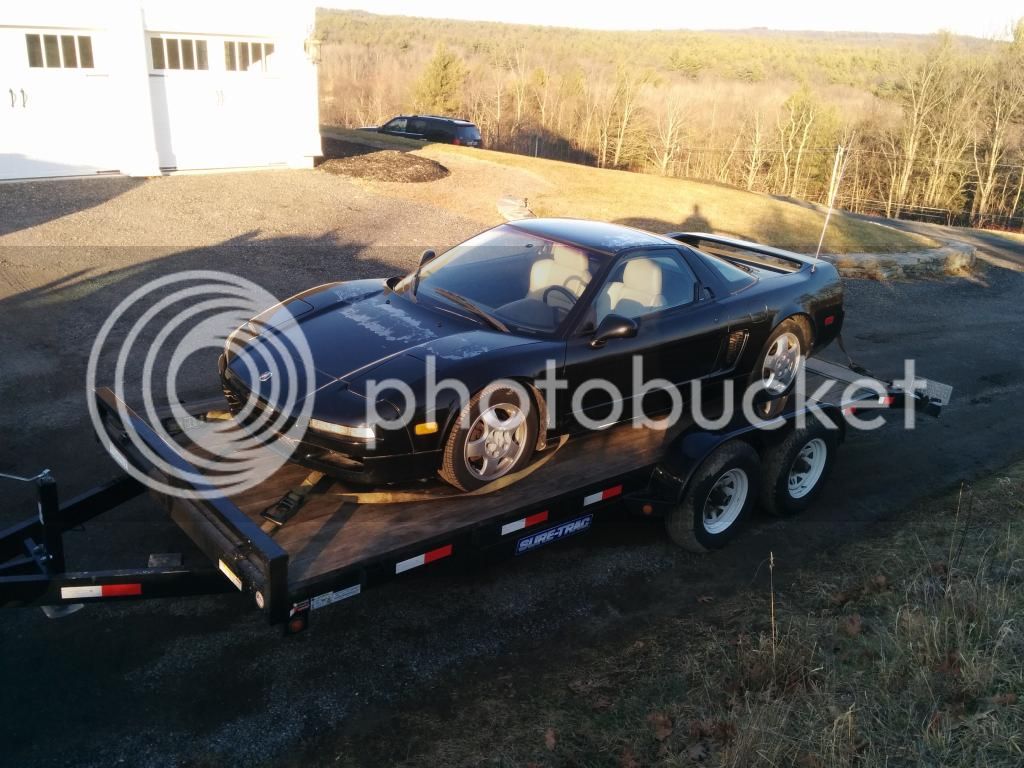 all loaded up for the 2.5 hour trip back to maine. in front of that last garage door in where this poor car sat for the last 3 years..... owner had pulled it out of the garage and left it running and went inside. came back out and it had stalled. he didnt bother to figure out the problem or push the car back into the garage. this action is surely what killed the paint on the car. after i agreed to come back the second time to buy the car, he claims he found a blown fuse and thats all it took to make it run again.... no clue if thats true, but it runs now. first time i went and looked at the car the fuel pump wouldnt run, so who knows. probably replaced the main relay or something.

after i got the car home i did two things: 1st pulled the front valve cover to check how old the timing belt was, since the owner clamed he never changed it. he hadnt, it was the original. but in surprisingly good shape. ill be changing that before the car gets driven. 2nd thing was to get the stock wheels off. i know there are plenty of nsx people that like the oem 91 wheels but i am not one of them. i had these s2000 wheels laying around so i put them on. looks better already. 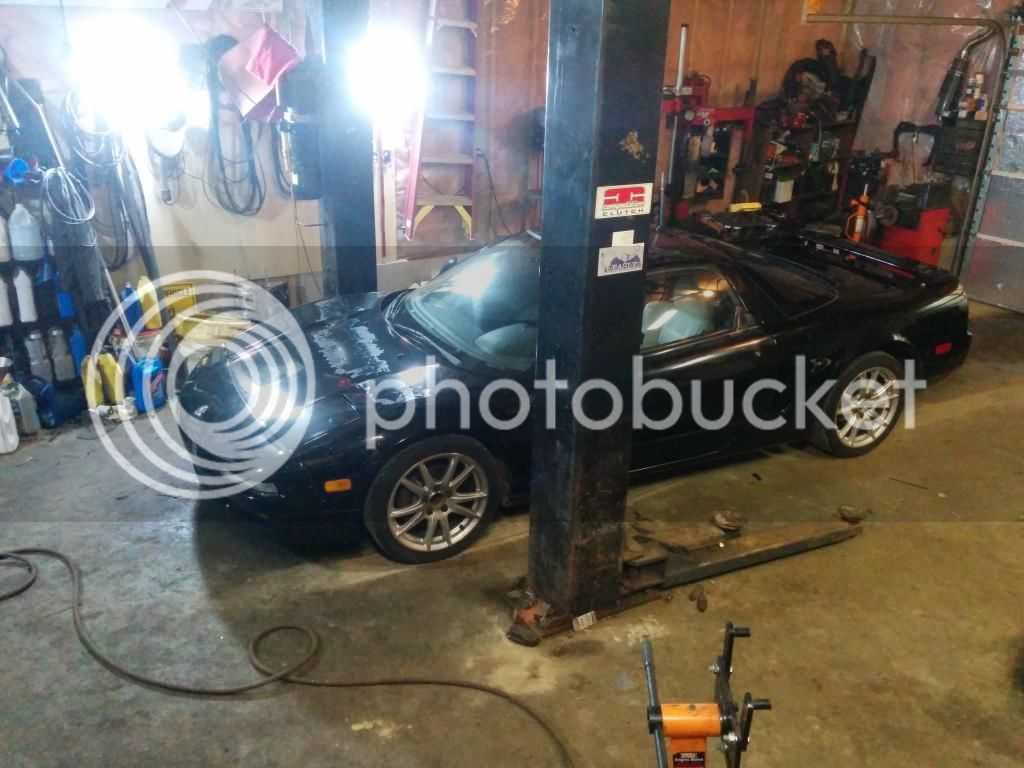 while the car was on the lift i went over the running gear and suspension. everything looked great, only leak is from the oil pan gasket. simple fix.
heres some more pics of the wear and tear on the car. 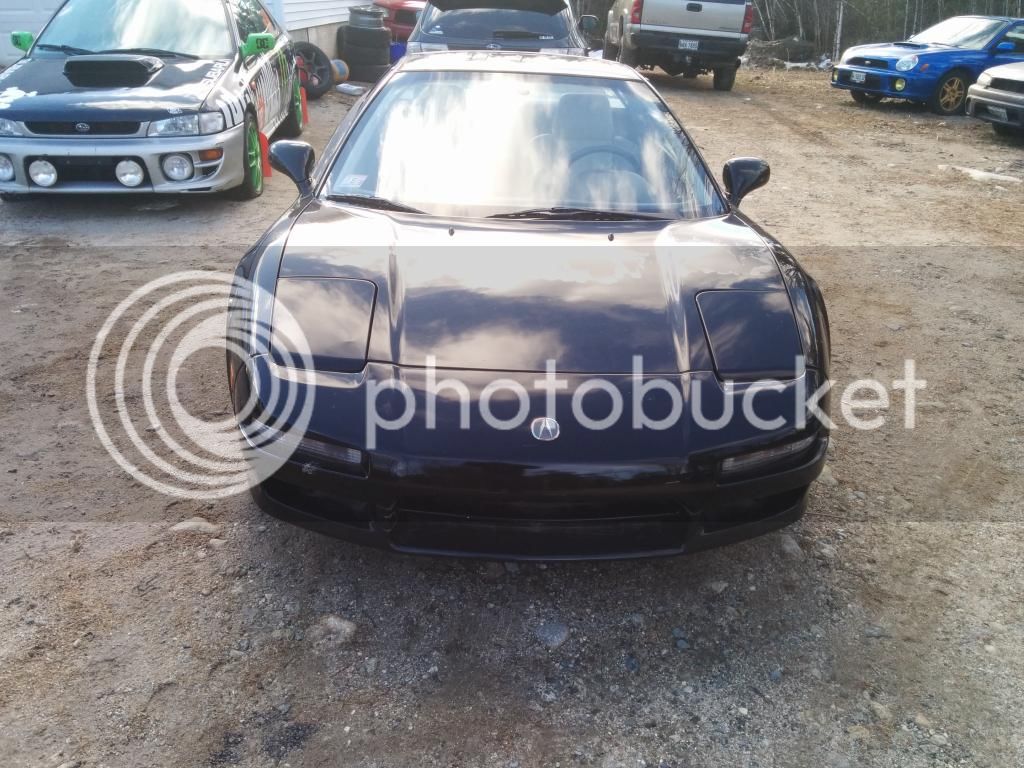 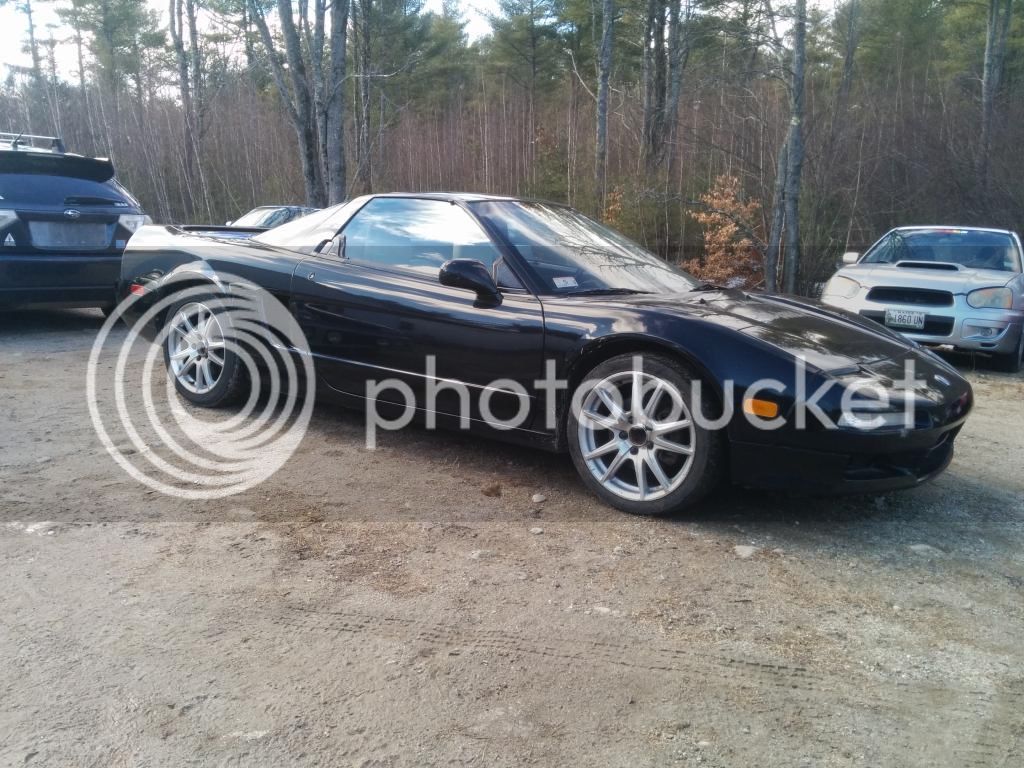 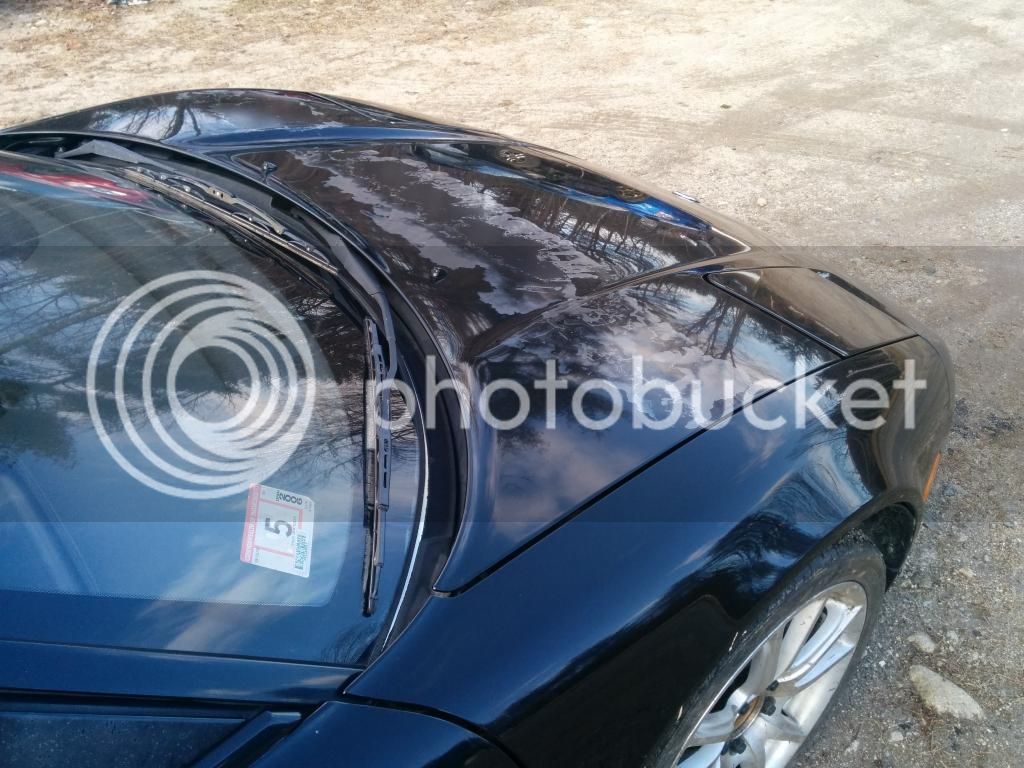 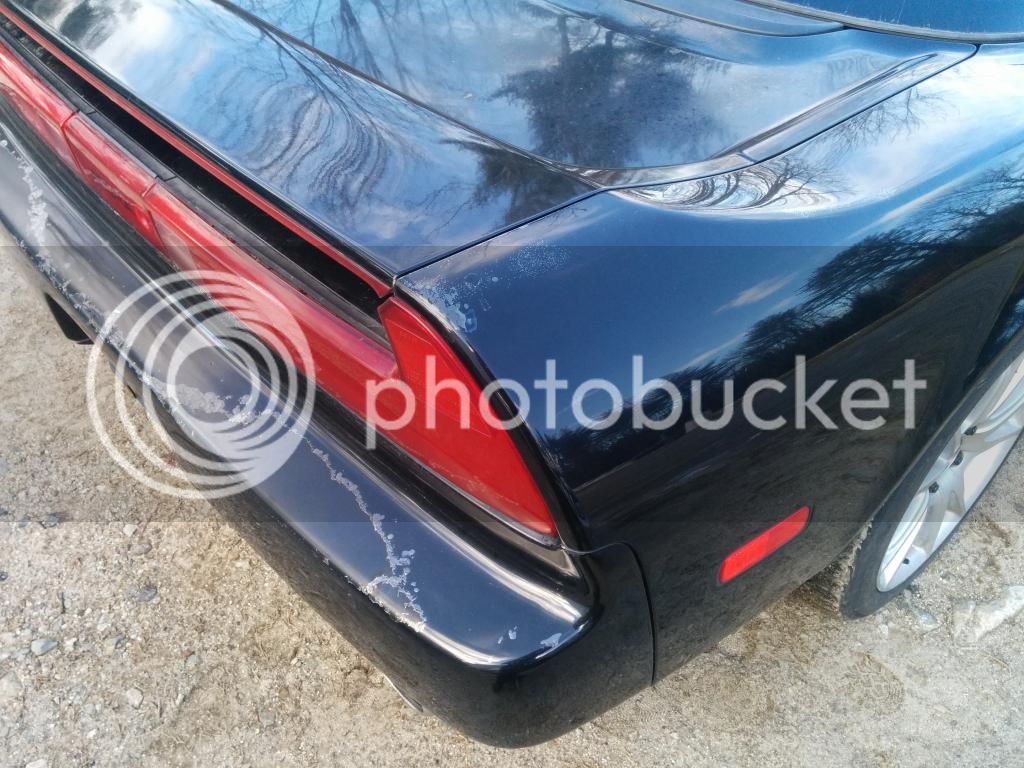 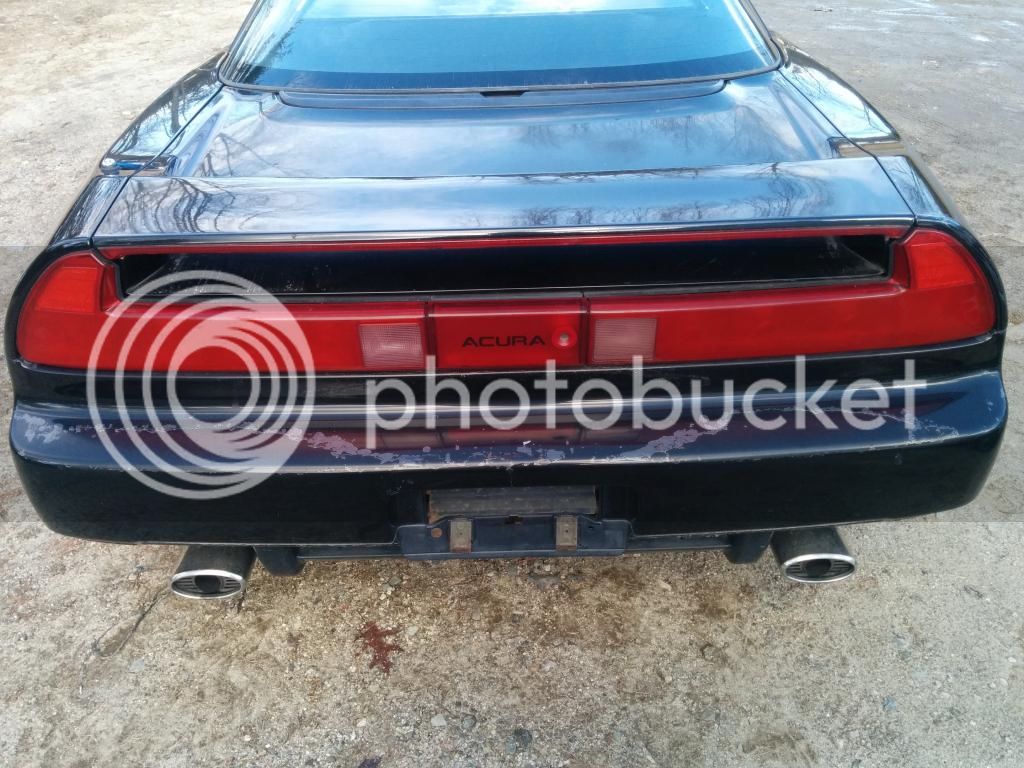 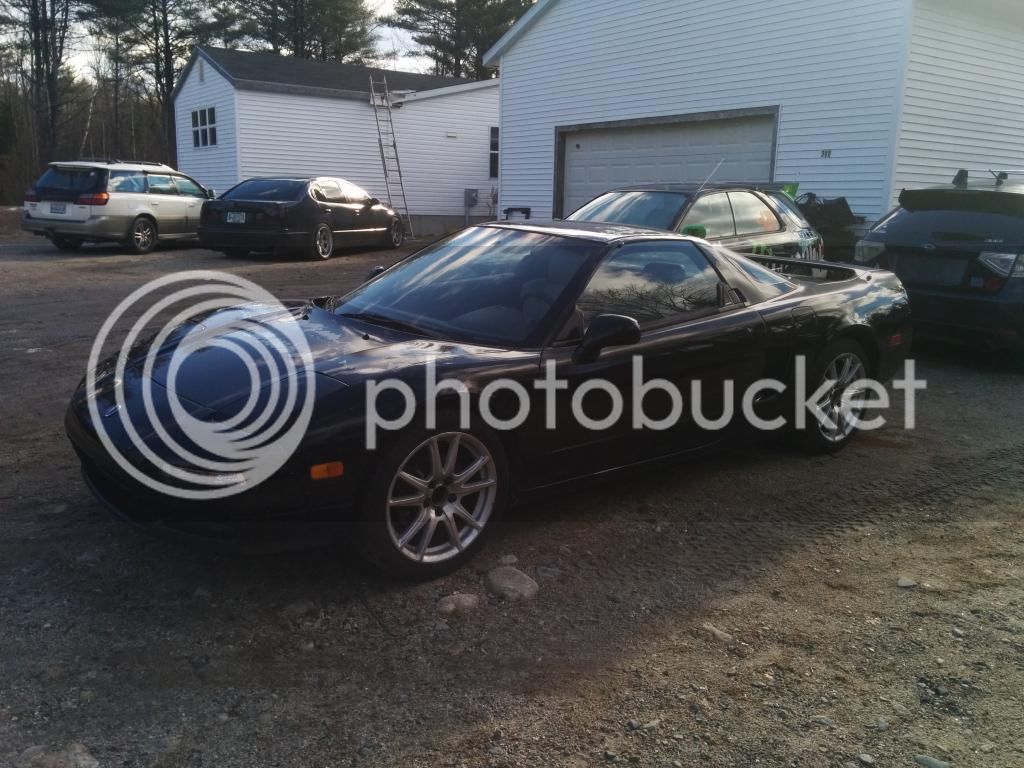 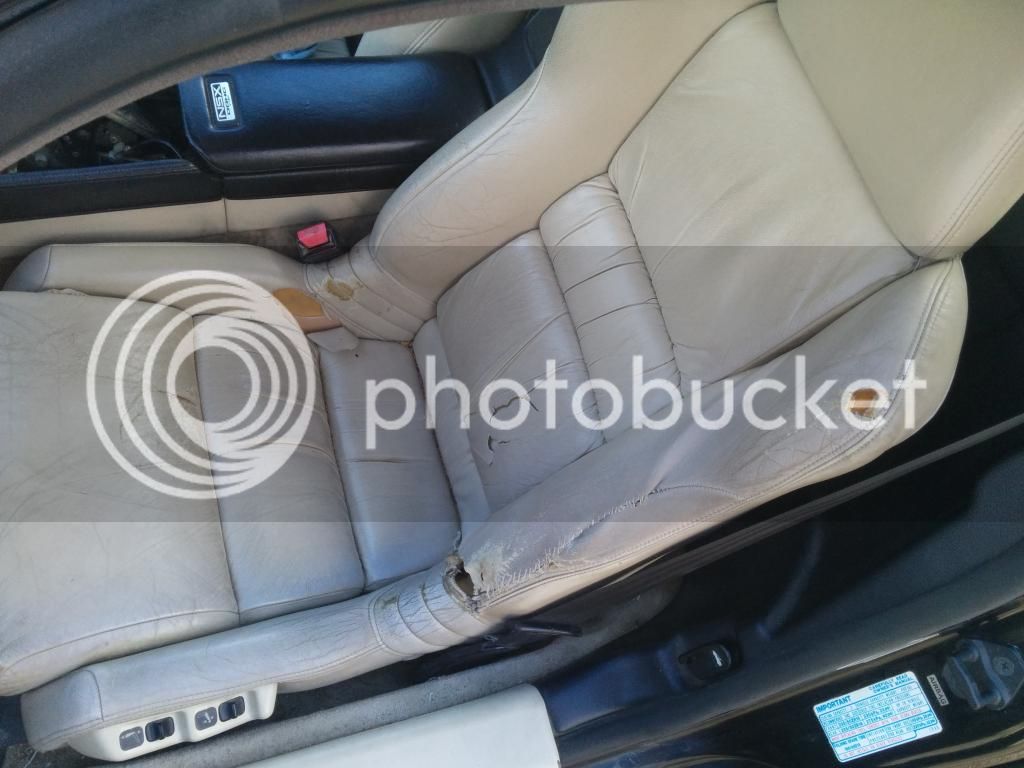 this seat is trashed. the passengers isnt bad, little worn but save able. not sure my course of action here, if i can find a good left seat i might just replace it rather then recovering both. carpets are stained but cleanable. center console is hacked up from a botched radio install, so im probably going to have to break down and buy one of those. trunk is missing all its paneling and carpet. luckily i can do all the work besides the paint myself, i run a shop working on subarus out of my home garage so mechanical and interior work is no big deal. this will only be the second nsx ive ever touched though, the first being my fathers. i swapped his automatic 91 to a manual back in november with awesome results. he had a thread in the diy section, screen name 32york.
his car, which is absolutely flawless. 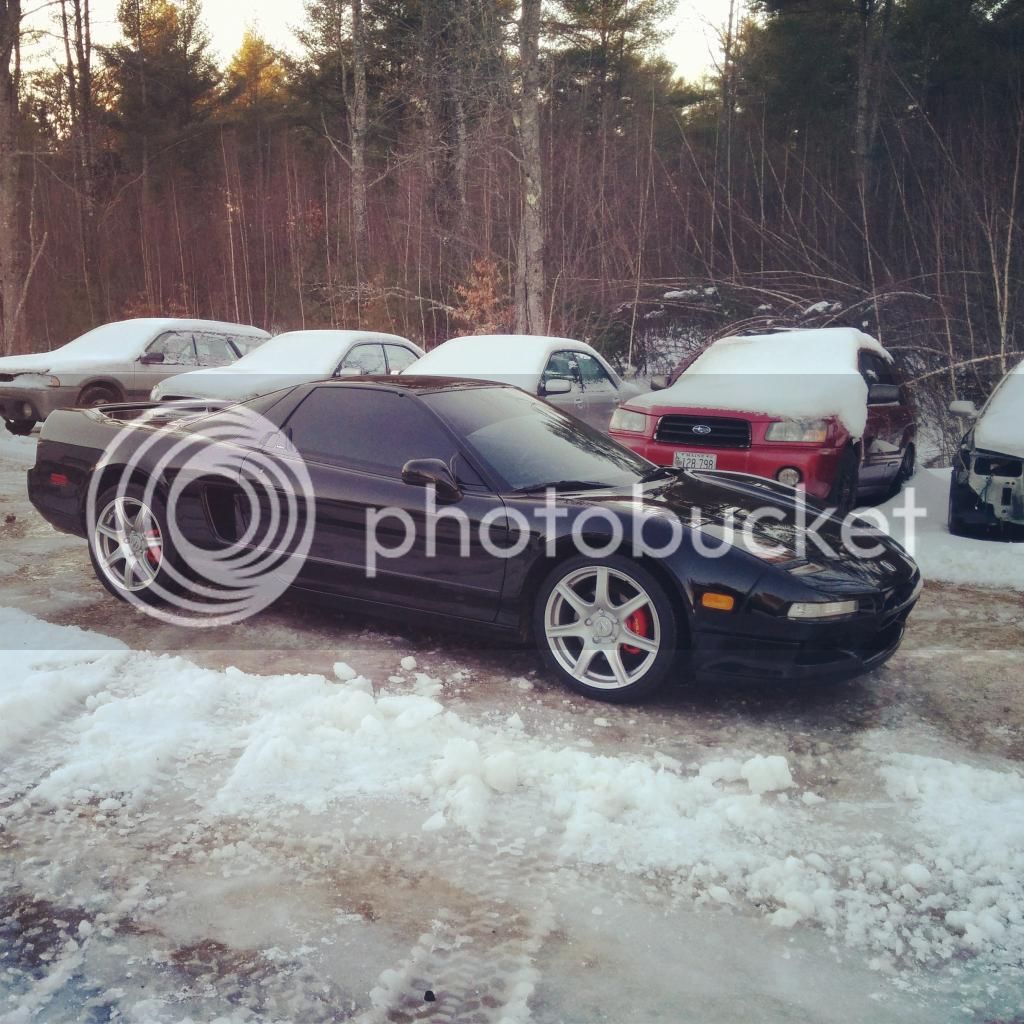 im still on the fence whether or not ill keep this car. in one hand im in a position to make out quite well selling it after i get it all fixed up, but on the other i know for a fact ill never buy another nsx in this condition for this money.... this will be japenese 90's sports car rescuse number two for me, last fall i got my 94 supra and it was in worse shape then the nsx. its come a long way but theres still more i want to do.
couple before/afters

similar back story. neglected/dissasembled for 8 years, owner lost interest. 70k on it and 6spd turbo car though.

and this is how the nsx is sitting now, changed wheels again, had these volks from the supra before i got the ccw's. the tires arent the right sizes but with proper tires and a little drop, it will look great i think 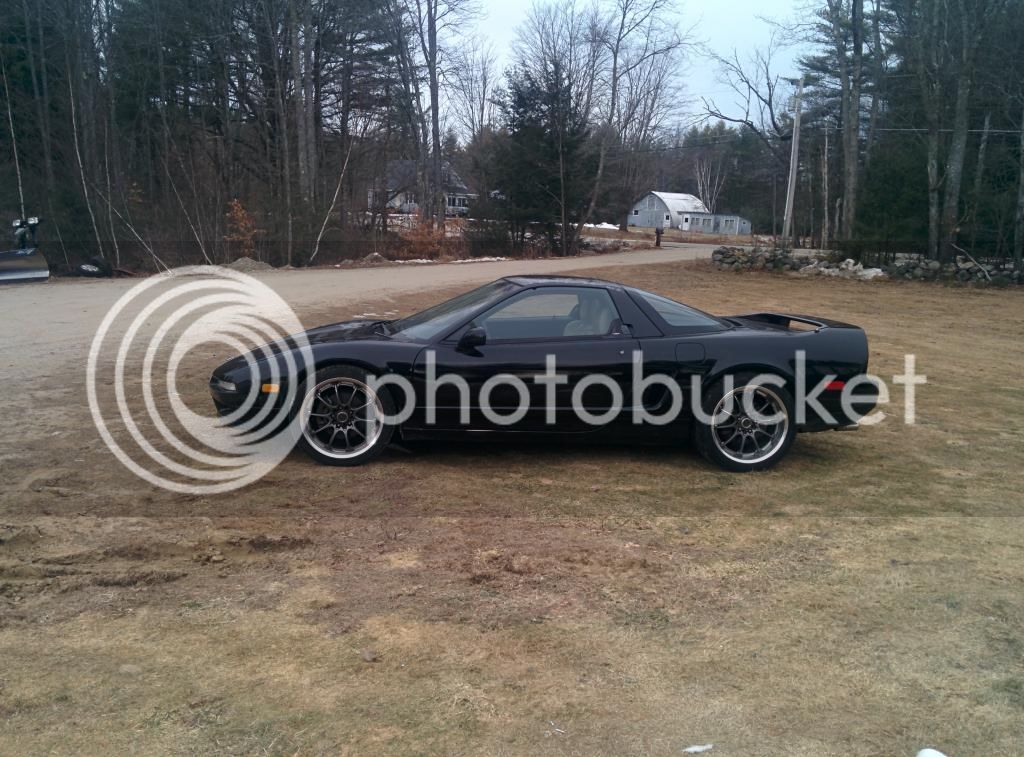 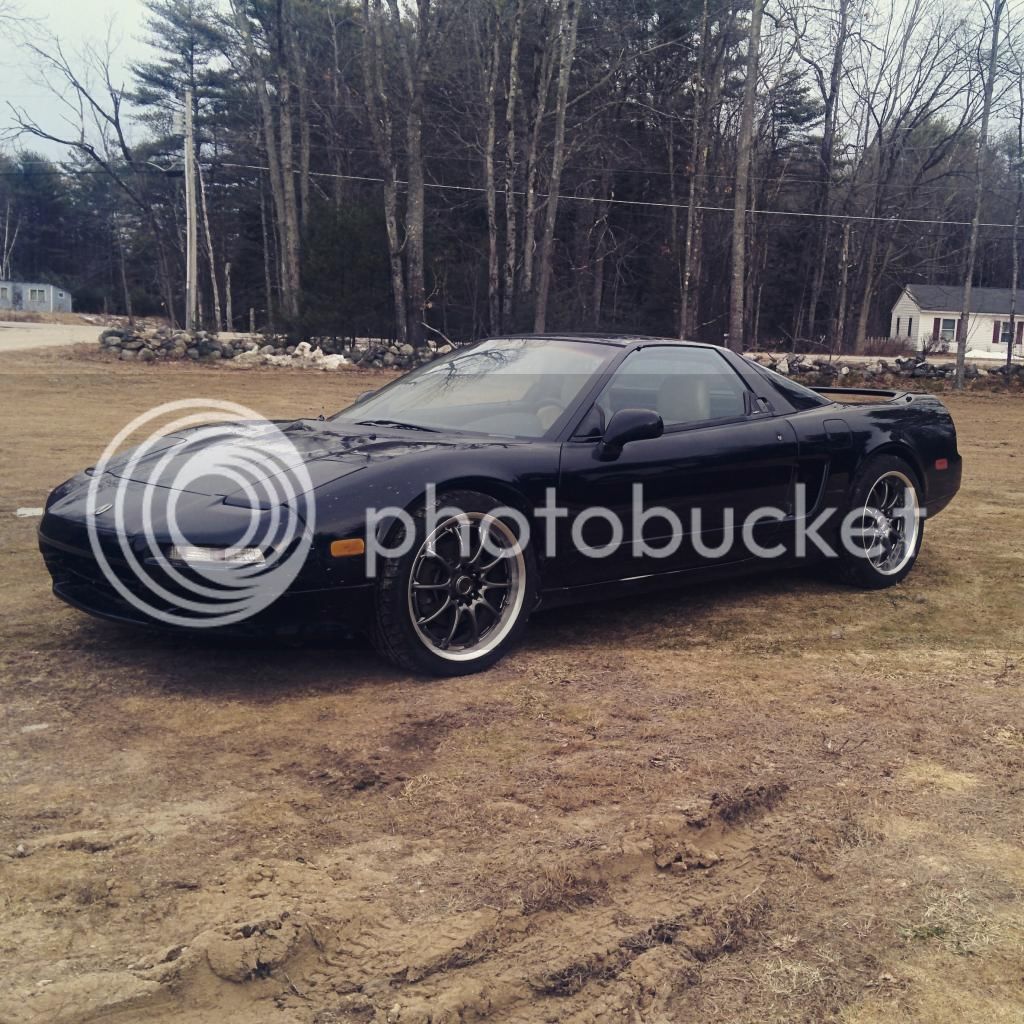 love how your s2k wheels get used a lot on different cars :tongue:

Looking forward to the rest of the updates.

the 2002 rims wanna sell them? what did you do with them?
and great job fixing cars people forgot about, makes me sad to see people not give a crap about cars.
its a mans extension of himself not some sheep car like a vette or Ferrari ya know
" A man that does not smile should not have a shop"

You have some work ahead of you, I guess that's about all you can during Maine winter lol. Good luck and keep us updated

Great find, a square frame for $15K is I deal I think, especially with a running engine. Quite a score.

The driver's seat looks very used! How many miles on it?

Do you know Ryan from NEAD? They had a shop in Portland around 2000-2006 I'm guessing. He had a supra.
I will send pics soon once I take pics of the seats
02 Facelift NSX and 07 Ridgeline with 320k miles and still going!!!

Great rescue, I had Ivory origionally and the PO dyed the interior black. It was a horrible job. I really wish he left it Ivory. Its really starting to grow on me now.
1991 Berlina Black Acura NSX Buddy Club | K&N | StopTech | Hawk | Enkei | Yokohama | Alpine | Pride | Seibon | Recaro |

Meyagi said:
... a neglected 91 that hadnt run in about 3 years that he was thinking about selling.... after some haggling and negotiating, he came down to 15k.
Click to expand...

Agh! Why cant I seem to find a deal like this? Awesome find!
The backwards build: 91 Silver/Black #1605

Meyagi said:
car only has 115k mi on it. im not sure how he managed to destroy the seat so badly.... that being said if anyone has a half decent ivory seat, im interested. would save some money over recovering both.
Click to expand...

You'd be surprised. My car has 20k less miles and my driver seat looks worse than yours. I have no clue how my rips started, but once they start they just get bigger and bigger.

figured id update this, i disassembled the car for paint and found a shop i trust to handle the paint job. i figured there was no sense in me paying the shop to do the stuff i could do myself, so i removed the bumpers, sideskirts, air scoops, mirrors, door trim, door handles+locks, rain gutters, and the panels behind the side windows. ive got pics of some of the process ill put up at some point. still trying to find some tan seat covers that arent $$$. im doing paint/seats/all maintenance/drop springs/lip/headers and making an exhaust, and thats it. car will be an awesome cruiser. hopefully road trip down to the tail of the dragon in NC this summer!
1991 NSX 5spd Twin Turbo
1994 Supra Turbo 6spd, 3.4L 76mm Turbo fed money pit.
2009 R8 4.2 6spd

Hey Mike....It was good meeting you last week in Maine.....It's rare to come across an NSX parked during my travels....I didn't notice your headlights until you left...what modification did you have or is that just the type of light bulb you have in them? 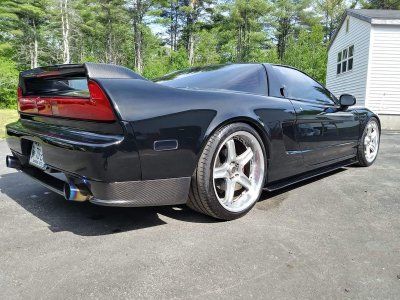 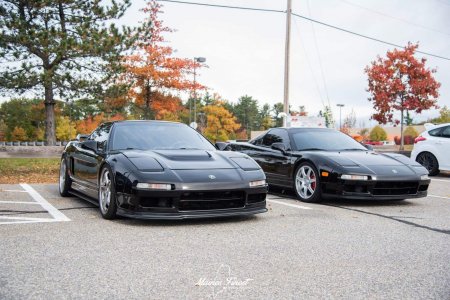 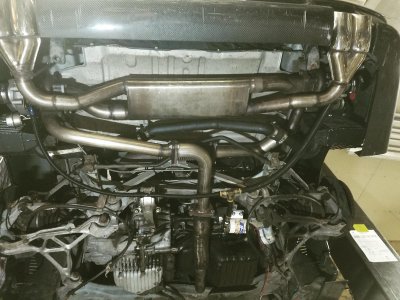 Last picture of the 3 of them before I sold the skyline. Volk GT-C on all 3 cars too 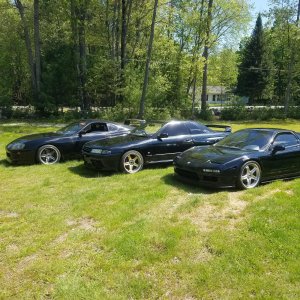 And the day I picked it up to the present day. 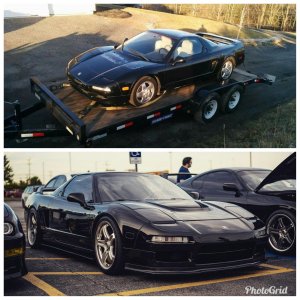 Wow, what a fabulous transformation. Glad you kept the NSX and continued building it to your spec. I wouldn't change a thing.
Any photos of the interior? I image you restored it to the same spec as the exterior/motor.

New caretaker for a 1991 bought from original owner. St.Louis area