One more French NSX owner had issues with his original speakers - which led him to turn the active speakers into passive ones, using a separate amplifier a few years ago.
he removed amplifiers have been waiting for a capacitor replacement and repair since then. The assumption that the PCBs were "in good condition" did not come true, though, especially since these are the first generation ones, easily detectable by the green electrolytic capacitors. The right amplifier's PCB was showing a burned-out MOS-FET transistor as it happens quite often in case of capacitor leakage. The effect is described in the corresponding blog entry on NSXCB about technical issues with this design. The centre amplifier board was suffering from so much capacitor leakage the the liquid was literally dripping from one of the transistors and the left amp PCB looked "normal".

Due to the obvious damage, no try was made to power any of them up before the PCB was cleaned, repaired and damaged parts replaced. The hot glue was removed by help of hair dryer, then all electrolytic capacitors, the MOS-FET transistors and the coils (for better access during cleaning).

Since one transistor was burned and all the others showed inconsistent readings, all twelve were replaced. They were either damaged or their case soaked up some of the capacitor liquid causing them to act strangely. Since a compatible replacement type is cheaply available it's the safer road to take. 
​
One PCB was missing a small glass body SMD diode, probably damaged at some point in time, and the left PCB's C25's solder points needed strengthening as the acid had eaten away parts of the copper trace. The PCBs were thoroughly cleaned, all contaminated silk screen removed with a fibre glass brush and strengthened with an extra layer of solder before re-population and restoring of the conformal coating.

All went smoothly until the last amplifier. It did not make any sound when connected to power. This is a typical sign of one of the proprietary BOSE IC being damaged. Further analysis of U2 showed that it was providing the expected triangle signal on C16 but no high frequency output towards the MOS FETs.

Removing U2 by de-soldering is a difficult task. The old solder can't be sucked away efficiently, hot air can't be used due to the SMD components on the back of the board and a total number of 20 feet makes it impossible to mechanically move it while heating up leg-by-leg. A proven way is to cut off the legs and de-solder the remaining pins separately, which is what I decided to do.

U2 replacements were bought some time ago from a Chinese seller. These are salvaged parts since the where never available outside of BOSE but are genuine components, nevertheless. U2 was replaced with 20 pin precision IC socket and after putting in a replacement IC, the amplifier started to play again. We've been lucky U1 was not affected since the ICs used on these earlier PCB have not been spotted anywhere fore sale, yet.

Even though U2 was carefully removed, one trace needed to be repaired with a piece of solid copper wire. 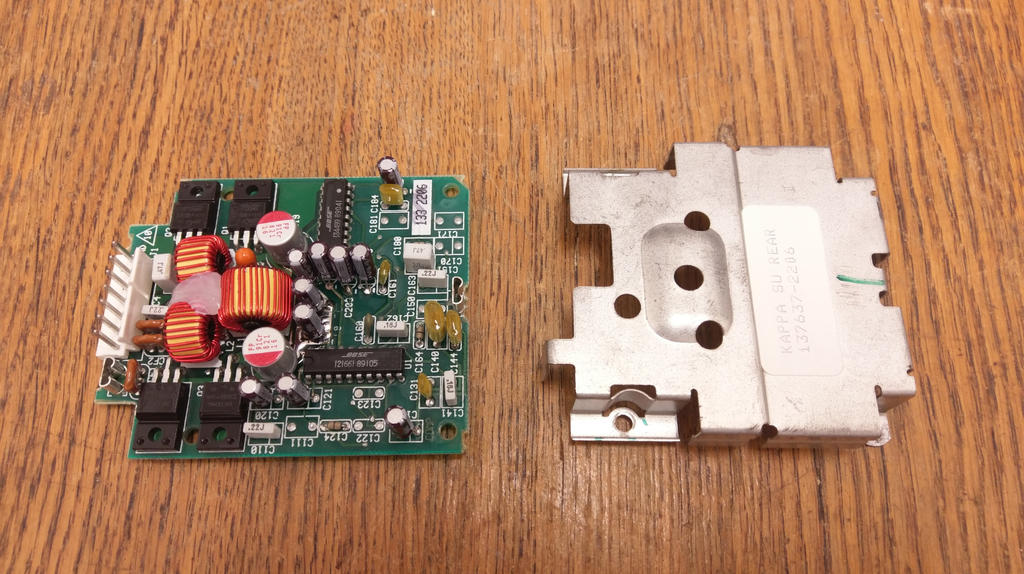 Hi Lars,
Many thanks for the fantastic job done on my amps!
In the meantime, I took the radio head unit out of the car to restore the original audio output to the amps.
Strangely, the unit works fine with my Ipod through the Grom interface but the sound from the FM tuner is heavily distorted?
On top, I'm getting no sound from LW or MW radios?
The power supply board looks fine but I'm not confident enough to pull the mother board out...
Another job for you?
NA 1 Back to NA after 10 years with LoveFab turbo, D.A. racing radiator, Porsche 993 turbo calipers with Brembo disks, NA2 ABS, KW V3 Clubsport, Dali front 22mm swaybar, CE 28 N wheels, NSX-R spec diff, NA2 NSX-R body kit, Recaro seats...

Thanks for your e-mail and good to hear that everything is working as it should!
Even though the radio is running fine again, keep it under close surveilance and get those capacitors replaced some time in the future to avoid any damage. Remember that they'll all leak, it's just a question of time :smile: