A seemingly normal Climate Control Unit (CCU) with a fan working only in the max and off position came in from Switzerland.
The issue was confirmed in my own NSX with the self test not showing any issues just the fan not working as it should.
This usually points towards capacitor issues but when opening the unit it became obvious that the capacitors had already been replaced .. 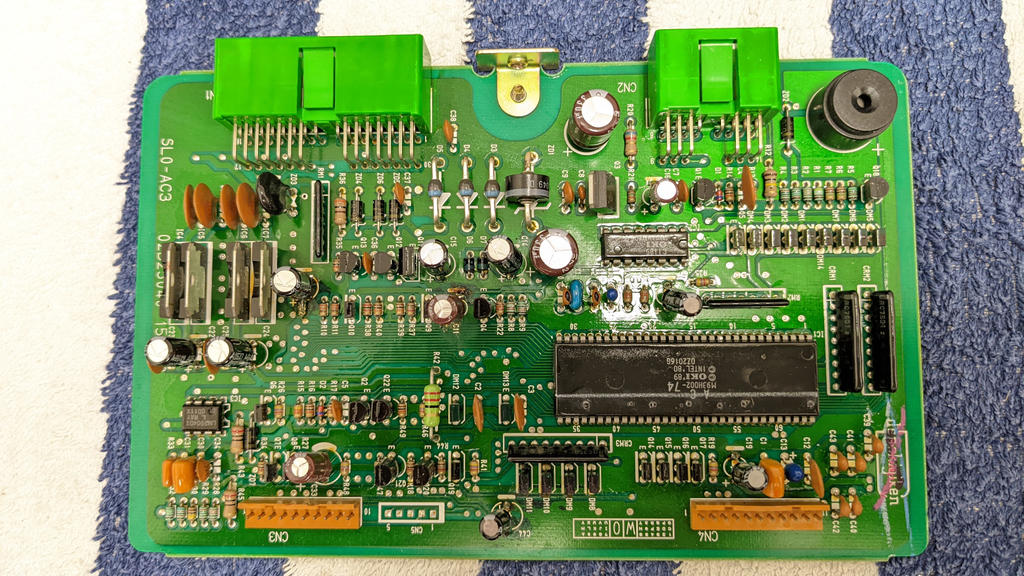 What was missed though was the mandatory acid removal.
Forgetting to do so will cause the destruction of the copper areas to continue underneath the PCB silk layer - until all acid is used up and the chemical process comes to a halt. 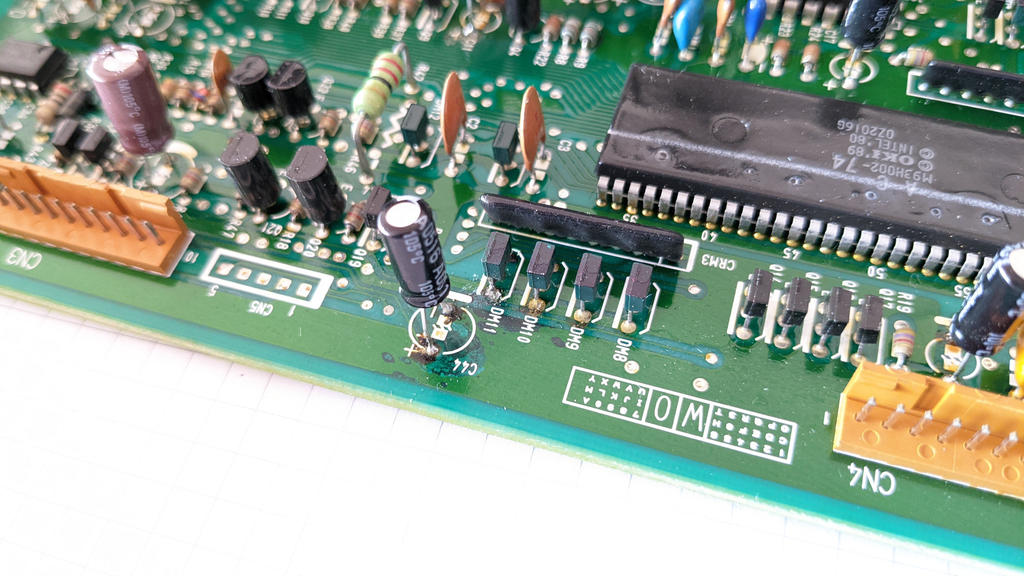 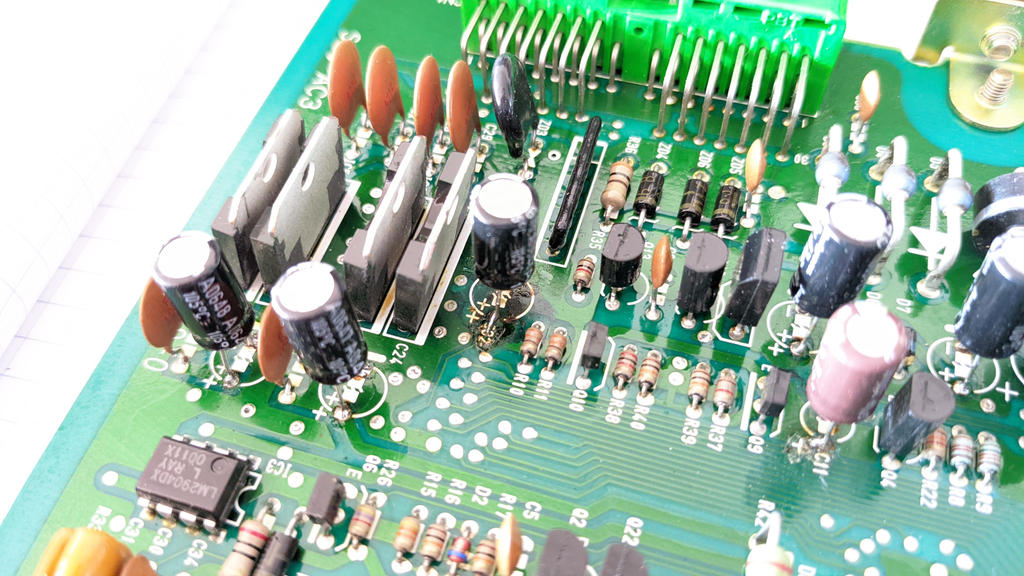 ​
First step is removal of the capacitors, cleaning the affected areas with a fibreglass pen down to bare medal.
Then checking for broken traces or missing copper with two cases identified: 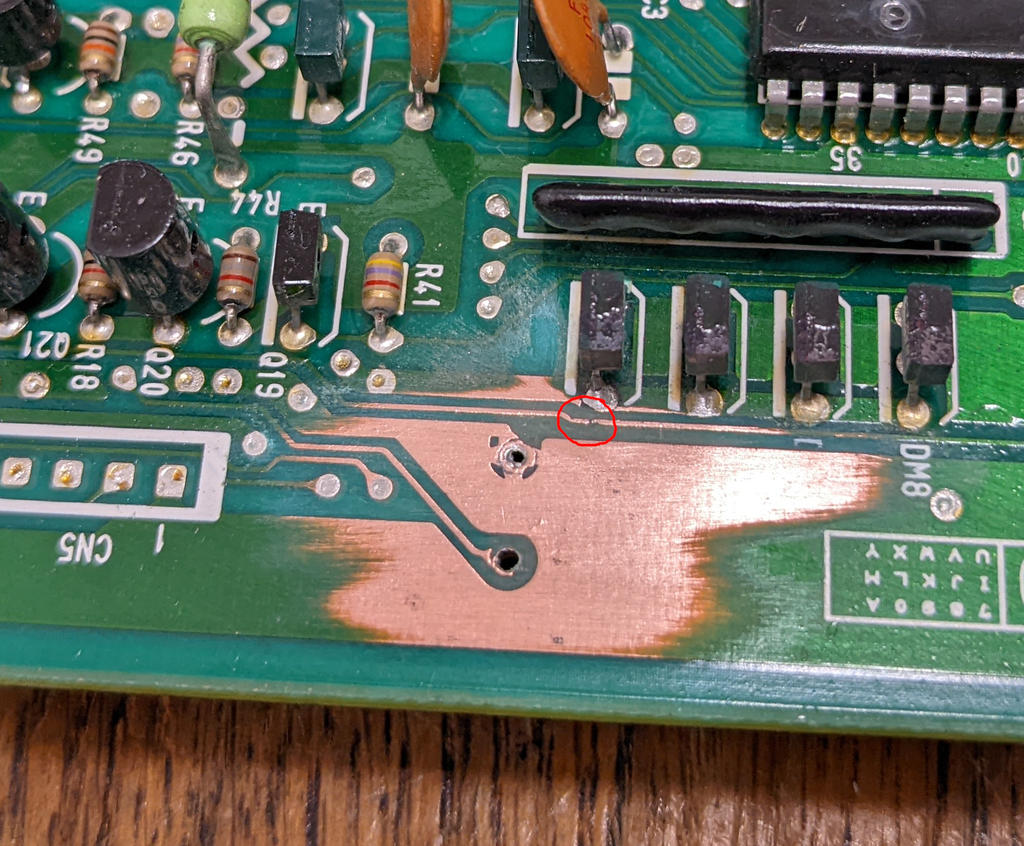 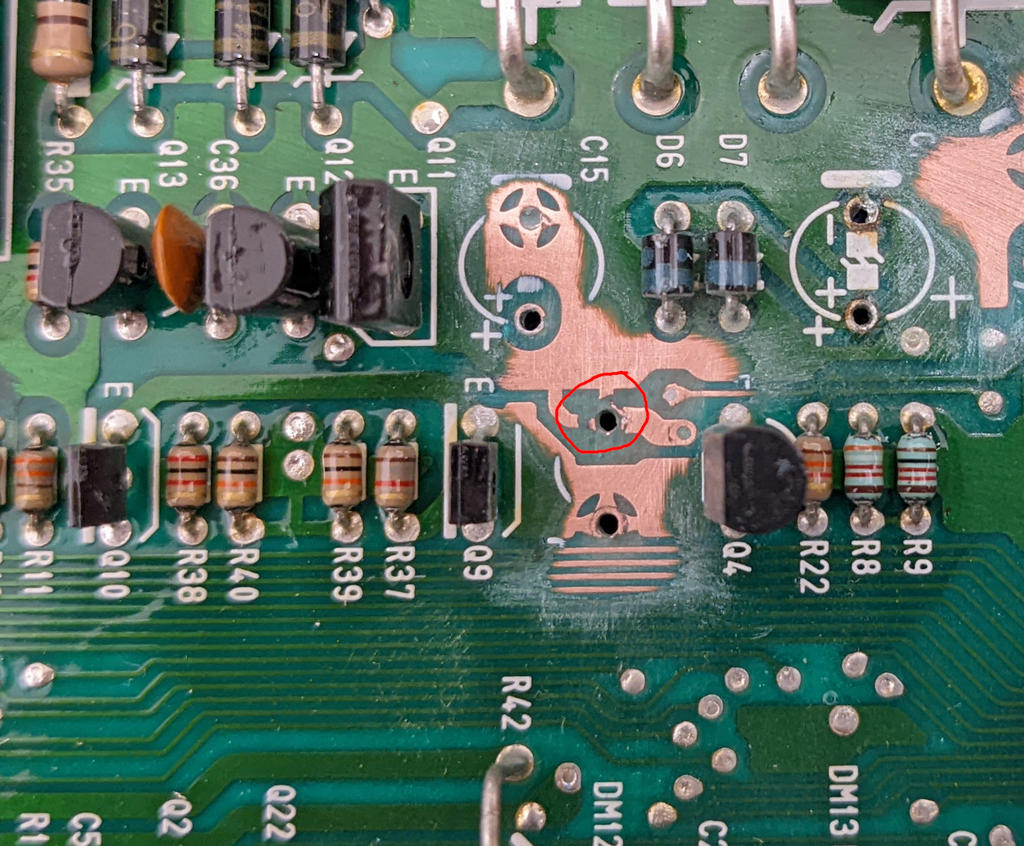 ​
Adding a thin coat of solder, new capacitors (all dry electrolyte types) and various repair wires later the board was back in working condition.
I'm still impressed how much damage and abuse the CCU board can take before failing completely. 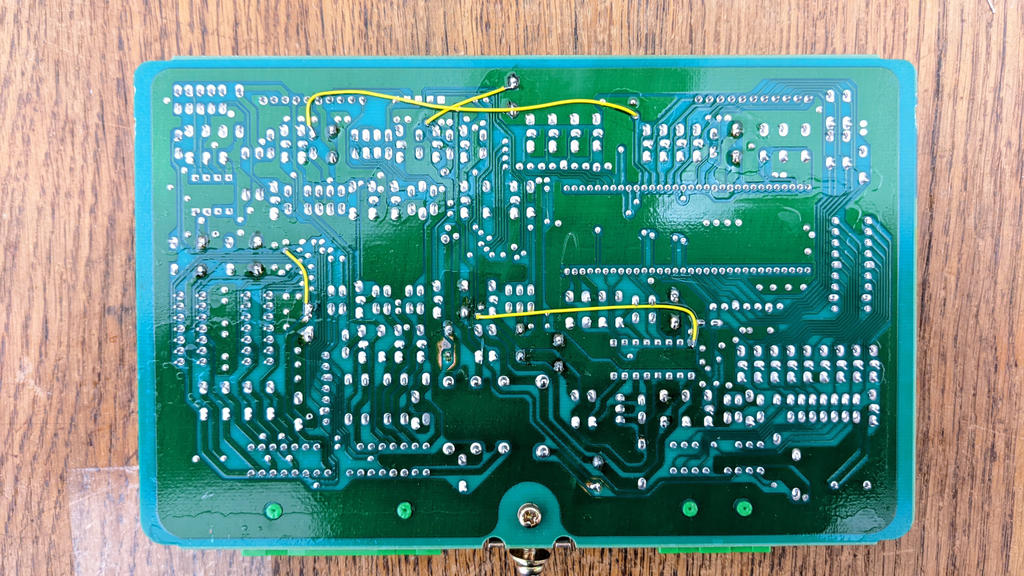 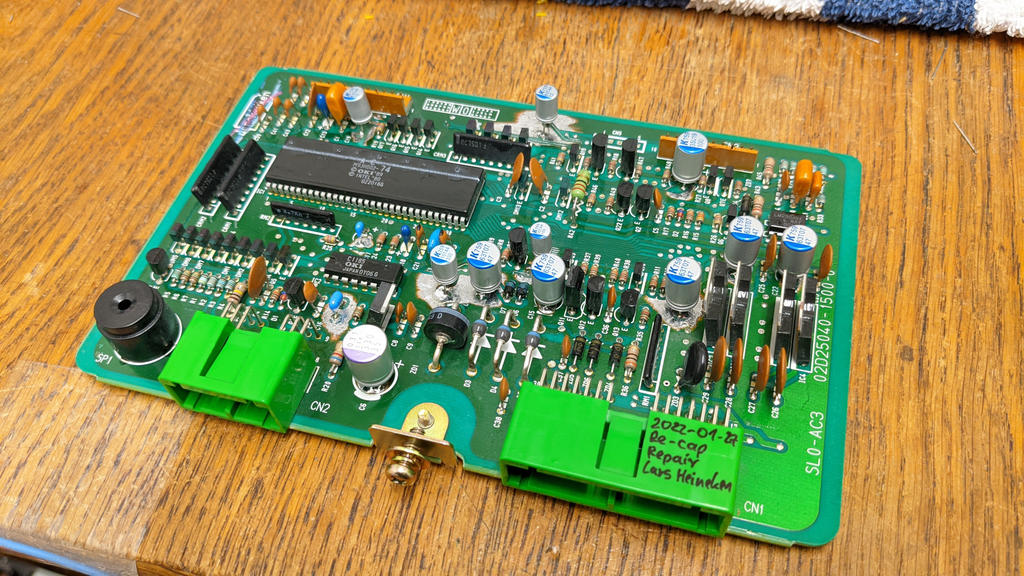 ​
After conformal coating and verifying operation in the vehicle I'm happy all is OK again and the CCU is ready to return home. 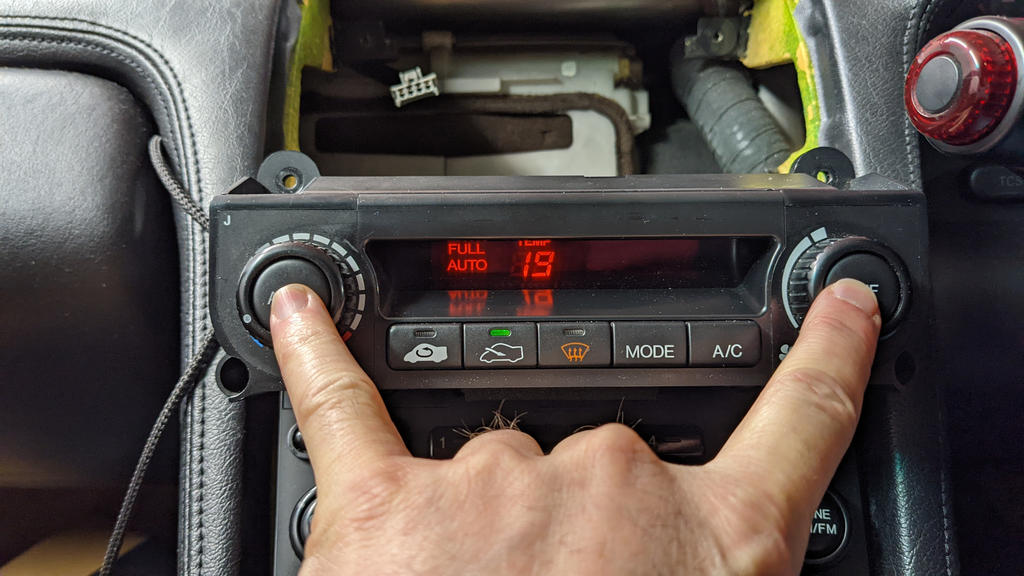 ​
In retrospective I'm suspecting that the missing copper around C11 (the second picture above) is what caused the fan control to stop working since it's near the responsible power transistor - maybe someone can confirm?
1997 JDM Custom Order AT VIN 1400005 - Stock
Heineken's Garage on NSXCB

Eagle eyes! I am not sure that I would have caught those failed traces.

On a slightly related matter, have you ever dealt with a CCU where the blower will sometimes operate at low speed when the CCU is off? When I first turn my ignition key to the run position, if the CCU is off I can hear the fan operating on a very low speed. That fan speed is unaffected by the position of the fan speed control. If I start the car and then turn the CCU on and then turn the CCU off the fan will stop. After that, everything operates normally.

2-3 years ago I replaced all of the capacitors. None of the capacitors had developed leaks. The sneak fan operation existed before the capacitor replacement and persists after the fan replacement. What is slightly frustrating is that it will not do this sneak fan operation at start up consistently. Sometimes on start up if the CCU is off the fan does not run. That makes diagnosis challenging. I think the fan power transistor must be getting a sneak base signal from someplace. However, I have not been able to determine whether it is an actual PWM signal from the CCU or a small DC voltage of some kind that is just enough to turn the power transistor on.

It had been suggested that the sneak signal might be originating in the fan control unit. There was no obvious connection between the two systems; but, it was minimal work to confirm or refute the theory. On an occasion when I was experiencing this sneak fan run problem I removed the rear interior panels and completely disconnected the fan control unit and the sneak fan operation persisted which is what I expected.

The fact that I can power the CCU unit up and then turn it off and the sneak fan operation problem goes away has me mystified. It almost seems like a firmware glitch of some kind. Any thoughts on what might be causing this would be appreciated.
"Your sole purpose in life might be to serve as a warning to others" - read that on the bottom of a beer bottle cap that I had just opened

To be honest, the second broken trace was discovered by my Fluke meter, but being short-sighted has advantages, sometimes :tongue:

When my own unit is re-installed I'll check for the sneak fan operation. It might really be a firmware bug since the interior fan is PWM controlled. If a stray voltage would activate the power transistor it would either run full speed or the transistor would heat up very quickly. If a true PWM is applied than the micro controller needs to run .. which would point to a firmware bug.

Maybe oscilloscoping the fan power wire during normal and sneak operation could yield some clues - a PWM signal will always have some sort of ripple ..
1997 JDM Custom Order AT VIN 1400005 - Stock
Heineken's Garage on NSXCB

When winter goes away and I get my car out of storage, a scope on the circuit to the base on the power transistor was my next plan. If the the motor is running in PWM mode the base voltage should show that pretty clearly. I had the same thought about transistor heating if a stray base voltage was driving the the transistor partially on. Partially on is a bad place to be for a power transistor controlling a motor. The fact that the motor speed seems to be consistent whenever it occurs makes me think it is in PWM control because a stray base voltage would likely have variable motor speed. It would also be odd that the stray voltage would disappear when I power cycle the CCU.

The only thing that makes me a little crazy is the possibility that I am the only NSX owner with this bug, or perhaps the only owner that has noticed it?
"Your sole purpose in life might be to serve as a warning to others" - read that on the bottom of a beer bottle cap that I had just opened