Location
In a Iglo

As in Prince Naseem Hamed, the boxer.

NICE! Was speed a factor? Don't matter he'll buy another one.

Man, I was all anxious to open this thread thinking to myself " how does some goat loving, dove crying, purple raining, went out with members only jackets freak still have enough money to afford a SLR.

hmmm... Yea, it's big news here across the pond. "Prince" Naseem Hamid, now retired from boxing, was arrested following the incident for leaving the scene of the accident & also trying to alter/manipulate the scene.

On a lighter note, the SLR will be available in Autotrader.com in a few months... I believe in FL, yeah that's it! :biggrin:
1994 nsx berlina black Type-U II

Location
In a Iglo

BOXING champ Prince Naseem Hamed was today bailed after being arrested over a 209mph car crash.

The smash happened during a “crazy overtaking bid” — leaving a man seriously injured.


Naz, 31, who is said to have fled the smash scene, was quizzed by cops along with two 26-year-old men, who have also been released on bail.

A police spokesman said they were being questioned about leaving an accident and attempting to pervert justice, adding: “There’s an ongoing investigation into the true identity of the driver.”

Naz and the two men, one of whom is thought to be his brother, were nicked at the star’s £3million home a stone’s throw from the crash.

The car — with the number plate NAS1 — is said to have tried to whip past a long line of traffic.

But it allegedly clipped one of the cars it was overtaking, then ploughed head-first into an oncoming gold VW Golf.

Horror ... firemen cut driver of VW Golf from the wreckage

The two-seater Mercedes slewed on to a grass verge and back on to the road in Sheffield. Its bonnet and a front wheel were ripped off and the whole driver’s side mangled.

The Golf driver was trapped in his car and had to be cut free by firemen.

He was airlifted to the city's Northern General Hospital with serious breaks to his limbs. He last night underwent surgery and is this morning "stable" in intensive care, a police spokeswoman said.

A woman passenger suffered cuts, bruises and shock. Her condition in the same hospital was this morning described as "stable" in a ward.

One of the men arrested with Naz went to hospital with chest pains.

The accident happened at 2.30pm on a road with a white “no overtaking” line.

One local said: “I heard a car hurtling up the road.

“There was a bang and a second later another. I ran out and there was a terrible mess. Two men ran past me. I said to them, ‘I think you ought to wait where you are’.

“As they ran away one turned and shouted something like, ‘I’m going to phone’.”

A witness in one of the overtaken cars said: “You could hear the guy in the VW groaning.”

Car-mad Naz, who retired from the ring three years ago, is a common sight around Sheffield in his motor.

A South Yorkshire Police spokeswoman said: “Three men have been released on bail this morning to a date in August.

“They were arrested on suspicion of leaving the scene of an accident involving an injury and suspicion of attempting to pervert the course of
justice.”
Len 3.8 a true O.G. of Prime, I miss you my brother R.I.P. 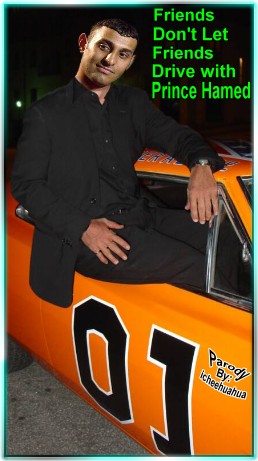 too bad he's a celebrity and won't go to jail as he should...

I always hated his guts when he was a boxer. An arrogant, cocksure, prick. I forgot who finally kicked his @ss, but it my father and I loved it. I totally agree he should go to jail. If you must drive like an idiot, reserve some track time.
Jesse
'99 Kaiser Silver

hmmm... It was Marco Antonio Barrera who defeated him (The Prince), rather soundly in fact. Those latin boxers, you need a sledge-hammer sometimes to knock them out. It's amazing that De La Hoya had such fierce punching power back in the day when he streaked through the ranks and weight classes. His victims, err- I mean opponents were carted off in stretchers at times... mostly latin!

As far as "The Prince" Naseem Hamed, think WWE, when you think of his antics. It's all an act & image thing my friend told me, who has family that knows "The Prince" on a more personal basis.

His entry to the ring use to be the highlight, lol... sometimes being carried in a babylonian royale sedan, othertimes being lowered from a harness that he swung in w/, and of-course the entourages which had Puff Daddie, Lennox Lewis, and others! :biggrin:
1994 nsx berlina black Type-U II

Judging from the looks of the road and the country in which the accident occurred, I'm guessing this must be a typo and should read "209 KPH"?
Ken Crowell
'91 Sebring Silver
FSTR N U

Anyone heard an update of this crash (prosecution, Golf driver)?
Jesse
'99 Kaiser Silver