Meeyatch1's NSX, and its journey to see the 'NSX Whisperer' at Daisy Import Auto Care

When you have a special car, a car that you care about like it is a family member, finding someone to take care of the car when you cannot has always been a challenge for car enthusiasts all over the globe. The task becomes infinitely more difficult when you live in a part of the country where the amount of NSXs registered in your state can be counted on both hands without using all of your fingers.

My 1994 NSX has been with me for 15 years, and has been a daily driver and occasional track beast for pretty much all of that time. Rain, sleet, snow, or sunshine, I have expected my NSX to work properly that entire time. For probably 12 of those years that was not a problem. I did most of the standard maintenance myself, while cringing as I took it to the Acura dealer for some of the more involved work that I just could not do (timing belts, accessory belts, and so on). Well, 'Phantom' began to show his age at around year 12, and little gremlins started to sneak up. TCS and ABS lights would come on, and when they were on there was a litany of other things that would not work. You know, like the heater, climate control, and rear defroster....in the middle of winter. My little buddy started to show its age in other areas as well. Faint smells of oil burning off due to a minor leak from the valve cover gaskets and other thing. The occasional oil drip on the garage floor. Phantom was wounded, and he was sad.

So I spent a little over 2 years (man, does time fly by) trying to fix these little gremlins, but I could never get it right for the long term. Then, in the fall of 2017 it finally happened. The original clutch that Phantom left the factory with had a spring snap inside the assembly, and the car was unable to be driven. 227,456 miles on the original clutch, and my little buddy was telling me that he needed some serious help. But where to send him? There was no way in heck that I would send my precious car to the Acura dealer. Just, no. Not going to happen. I needed someone who knew these cars inside and out, and would not be "learning" on my car. Especially with these mysterious electrical anomalies.

It was right around this time that "The NSX Whisperer", Ben Schaeffer, at Daisy Import Auto Care in Woodbine, Maryland, came to the rescue. He had heard about my plight online, and reached out to help. After a quick call, I felt comfortable that not only did he and his team possess more than adequate knowledge and experience with the NSX (there were (8) NSXs from all over the country in his shop at the time of my call), but it became clear that he truly loves these cars. This was who I needed to send it to.

So an enclosed transporter was arranged, and I shipped my baby off to Maryland from Indiana for some help. Upon arrival and assessment by the team at Daisy, it was determined that my little buddy needed more help than I anticipated. Where a clutch and electrical repair was the original plan, we quickly determined to add a major engine overhaul, transmission rebuild, and a list of other items to the list, all with the goal in mind of securing the long term health of my loyal NSX.

Now, it has long been said in the car world that if you want something done you can have it done well, fast, or cheaply. You can only pick a maximum of 2, but you cannot have all 3. This is entirely true. In the case of my car, the top priority was that it was done well. I gave Ben and his team all the time they reasonably needed and simply said, "I just need it back by the spring. You have all winter to work on it", and to work they went. By coincidence, but previous NSX (1991 Berlina Black / Ivory) was also at Ben's shop sitting right next to mine, and was getting a full automatic to manual transmission swap. They would keep each other company during the winter and their mutual transformations.

With routine updates and calls from Ben, and pictures of progress and of the parts being swapped, the cold winter months crept by. But with each call, Ben's enthusiasm and love for these cars, and for his customers, became obvious. The right team was working on my special little car.

Like with any car project, some unanticipated items added themselves to the list, and the reality that Honda / Acura really needs to do a bit better supporting these halo cars with proper parts availability, became obvious. Certain parts were on back order for months, but luckily became available eventually. For that, I am thankful. Then the call came from Ben in early April, "Get on out here and pick up your car". I was ecstatic!

I booked a flight for that weekend, and hopped a plane to get my Grand Prix White friend. Ben's shop is a temple to all things NSX. They were everywhere, all from different states. On top of the work we planned, Ben threw in some "surprises" (at no charge) for my car to freshen it up even further. Needless to say, I was extremely happy with the result. The car idled perfectly, the shifts were more precise and smooth than they had even been, there was no smell of oil permeating the air. It was like having a new car again. The next 600 miles back home were smooth, and joyous, and by the end of that day my buddy was back home in the garage.

So it was a long journey for my little NSX and I. But I cannot say enough good things about Ben and Daisy Import Auto Care. They love the NSX, and it is obvious. But beyond that, they know this car inside and out. The electrical issues that nobody else had been able to fix over a 2 years span were fixed by Ben in 1 day. Let that sink in for a minute. 1 day. It was awesome to have it back, and if you need any feedback on Ben and his team at Daisy, please reach out to me. I would be happy to recommend him to anyone who puts the quality of work as their top priority in NSX ownership. 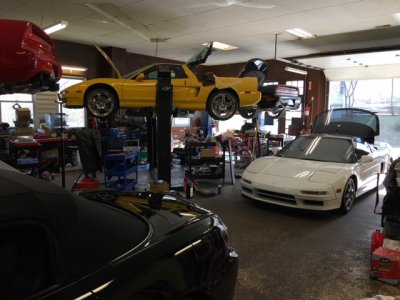 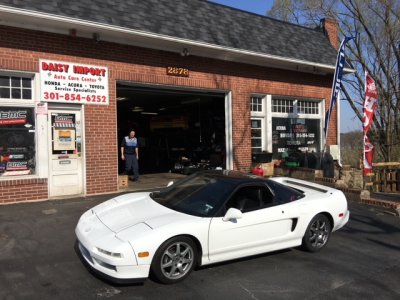 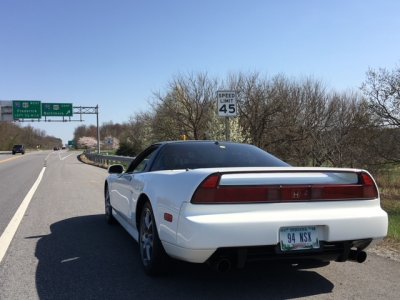 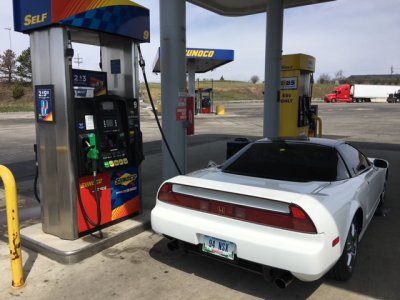 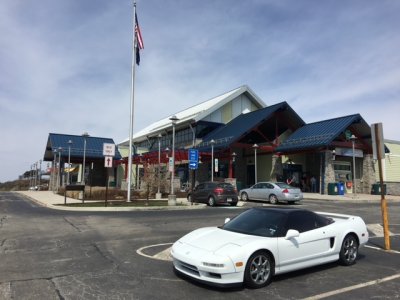 JoseJA1979 said:
what fixed the electrical issues?
Click to expand...

I cannot remember what Ben said it was. Hopefully he will chime in here. I do remember it being near the vicinity of the fuse panel in the driver side foot well though.
Mitch

Great story! Wish there were more details about all that was done to refresh the car!

It's like having someone like Kaz for us in the US. We'll all need this type of service at some point.

Nice! So glad to hear everything is back to 100% and you are back behind the wheel where you should be. Same year, same color, same loyalty to mine and for a while even the same plates here! Enjoy it in good health. Mine sends its regards from the garage.
'94 White/Black
20 years of smiles and counting.
R.I.P. Len3.8, you are missed.

And here I though Larry B was far. Can't believe you had to fly to your mechanic. Larry B is about 3 hours away. I typically drive there and take the train back.

It sounds like you found the right mechanic for your car. I would us no one but Larry B for my NSX! Great story.<script type="text/javascript" src="safari-extension://com.ebay.safari.myebaymanager-QYHMMGCMJR/efb909af/background/helpers/prefilterHelper.js"></script><script type="text/javascript" src="safari-extension://com.ebay.safari.myebaymanager-QYHMMGCMJR/efb909af/background/helpers/prefilterHelper.js"></script>
1991 NSX Formula Red/Black Interior
SN 000207
October 1990

Kenwould said:
And here I though Larry B was far. Can't believe you had to fly to your mechanic. Larry B is about 3 hours away. I typically drive there and take the train back.

It sounds like you found the right mechanic for your car. I would us no one but Larry B for my NSX! Great story.<script type="text/javascript" src="safari-extension://com.ebay.safari.myebaymanager-QYHMMGCMJR/efb909af/background/helpers/prefilterHelper.js"></script><script type="text/javascript" src="safari-extension://com.ebay.safari.myebaymanager-QYHMMGCMJR/efb909af/background/helpers/prefilterHelper.js"></script>
Click to expand...

I recently PM'd Larry for some NSX maintenance since he's relatively close to me and his response was "Sorry to say, but at this time, I am not doing NSX work."
1998 Spa Yellow - Current
1991 Formula Red - SOLD

Great story and result. I wish you and Phantom many happy years and miles.
1991 Black/Black #2952

Ben at Daisy import auto is by far the most knowledgeable and best NSX mechanical artist around, period! Would never trust anyone else to work on my car.
1992 Red Turbo

Mitch - I cannot believe you somehow resisted the urge to do a mini “build” thread while this work was being done.

Like the others here, I’d love to hear more details.

Enjoy the ride, my friend.

Nice story. Sounds like Phantom is ready for another 15 years now.

pvmike said:
Great story! Wish there were more details about all that was done to refresh the car!

I will get the list and add it. It is a TON of work that was done.
Mitch

BamaFan said:
Mitch - I cannot believe you somehow resisted the urge to do a mini “build” thread while this work was being done.

Like the others here, I’d love to hear more details.

LOL! I was busy working to pay the bill.

I will add more details and pictures this weekend when I have some time.
Mitch

Meeyatch1 said:
I will get the list and add it. It is a TON of work that was done.
Click to expand...

Mine was there for 4 months during winter 2015 - 2016 and the experience was everything others have said about it. It's only a 2 hr. drive for me so I drive the NSX there and do a one-way car rental out of a nearby town to go home, reverse it when the car's done. There's a whole lot of peace of mind that comes with having that level of expertise and dedication so close to home. I don't consider the 2 hr. drive a bother at all, one way or the other it's 2 hrs. spent in the NSX, ain't nothing bothersome about that.
1991 NSX Black/Ivory, NSXCA member
2003 S2000
2005 FZ6
1998 Sportster 1200-S

Pricing on this NA1 NSX?